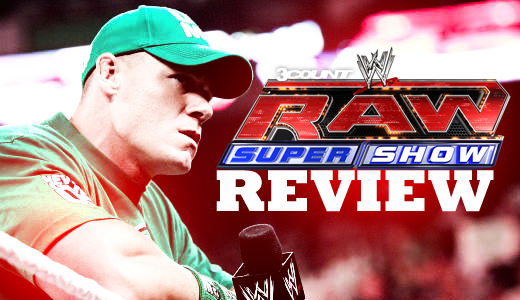 Post PPV Raw's never tend to be good, do they? After a fairly good Over The Limit PPV, we were treated to this the night after.

Seriously, there was very little that I enjoyed about last nights show. It was just so... bleh. Between the amount of Big Johnny and John Cena to the lack of compelling action, this was arguably the worst Raw of the year.

Big Johnny, John Cena and Big Show
If ever a segment set the tone for the night ahead, this was it. I honestly don't think I liked anything about this unbelievably long segment.

First there was Cena, who talked about his loss to Laurinaitis. I don't know what it was, but his promo just had a real odd feel to it. In many ways it looked like Cena was in a soliloquy with the way he was talking, and his anger towards the loss just didn't seem genuine for some reason. Not only that, but he didn't even blame himself for the loss. He said that no matter what time in the match he went to beat Laurinaitis, Big Show would have come out and stopped him. Yeah... no. If Cena kept hold of that STF then there is know way Big Show could have come out in time for the save.

And that wasn't even the worst part, things just got hilariously shit afterwards. After the introduction of Big Show, Big Johnny said that he rehired Big Show on Saturday. Oh boy. Straight away I thought “If he was rehired on Saturday, then shouldn't he be fired for interfering in Laurinaitis' match on Sunday?”

Yep, somehow that plot hole went right over everyone's head in the Creative room. I'm amazed that not one person in that room said “Eh, guys, wouldn't that mean that Big Show should be fired afterwards for interfering?” Instead, I think everyone just said, “Yeah, whatever, lets go with that.” Pure laziness on their behalf.

Oh, but it was totally OK, because afterwards Michael Cole clarified that Big Johnny and Big Show only made a “verbal agreement” last Saturday. Wow, yeah, they really dodged a bullet there.

Randy Orton vs. Alberto Del Rio
During my Over The Limit review, I said that there were many signs indicating to a Randy Orton heel turn, but all that appears to have led to a dead end, because on Monday Night Chris Jericho made a surprise attack on The Viper.

Nothing much to say about the match, but there's a few things to be said at what happened afterwards.

We all know that Randy Orton put Jericho “out of action” for a good while, so I guess this is Jericho looking for revenge, much like Punk last year when he sought for revenge for when Orton gave him a punt, costing him the World Heavyweight Championship.

This should be a good, little feud anyway. Both men work fairly well together, so expect a good match or two from them.

CM Punk and Daniel Bryan
Probably the only good thing about this episode, although even this whole segment had its negatives.

In my opinion, I think they should have switched the roles and have Punk tap out to the Yes Lock. We all heard that Punk admitted saying that there's no shame in tapping out when there's nothing on the line, and on Raw this past Monday, I think they could have gone in this direction.

Have CM Punk tap out to the Yes Lock almost instantly, and afterwards have him say that if something like that happened in a match he wouldn't tap out. And then boom, all of that sets up a Submission match between the two at No Way Out next month.

It doesn't really bother me that much though. If Daniel Bryan tapping out to the Anaconda Vice leads to him getting another title shot at No Way Out then I'm all for I. In the end, it doesn't matter if I agree with it or not, just as long as both scenarios lead to the same outcome.

CM Punk and AJ
I've really been impressed with AJ as of late. Her acting isn't exactly superb, but she's still doing an excellent job. With Punk showing a liking to AJ, this could mean a little love triangle is in the making, as Bryan could well get jealous over this whole thing.

John Cena & Sheamus vs. Dolph Ziggler, Jack Swagger & Tensai
First things first, they've gotten rid of the “Lord” in Tensai's name. Not a big deal, and probably not someone people should be looking into as some sort of indication that his push is now over.

The match wasn't great. At all. At this point in the show I just couldn't get into anything. The post match brawl was OK, I'm kind of a sucker for those type of things, but overall, it just didn't hit home with me.

Big Show knocked out Cena again, no surprise there. Hopefully this feud ends very soon because I don't think I can bare talking about this every week.

Unfortunately though, I don't see things getting better any time soon. This whole storyline with John Laurinaitis will probably continue to overshadow everything else. The WWE Championship picture will continue to look second rate, mid-carders will be left stranded with nothing to do, and all the while, John Laurinaitis will be talking about People Power, John Cena will inconsistently be going from super serious to super light hearted, and David Otunga will be flexing his muscles for an inconsiderable amount of time.