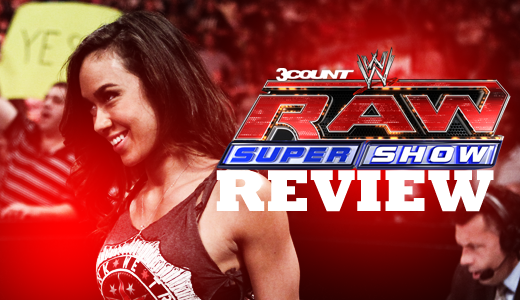 There's nothing worse than seeing Raw kick off with a wrestler you don't care for anymore, and who's in a storyline you have absolutely no interest in.

That was the case this past Monday, when Big Show delivered a promo filled with information we already knew. We were shown numerous clips of Over The Limit, were reminded once again that the main event from that PPV was the “darkest day in WWE history” and in true heel fashion, were shown some pretty valid explanations as to why Big Show is so pissed off.

It was the type of opening I was afraid was going to shape the rest of the show, but thankfully, this week's Raw was an improvement. And funnily enough, the good ending to Raw featured the same guy who opened Raw with that boring promo.

R-Truth & Kofi Kingston vs. Dolph Ziggler & Jack Swagger
While watching this match I came to the realisation that there's nothing left to say about these set of matches. They're generally fairly good, but never really have any development or back story to get invested in.

And while these matches are fine, I always thought that Ziggler deserved better. So, it came as a delightfully nice surprise to see him flip off after the match.

If all these indications are correct, it means that Dolph Ziggler is going solo again. Finally. After months of doing practically nothing, The Show Off might have something to do again. I don't care if he's not put into the main event scene right away, just as long as he's away from Jack Swagger. Seriously, Swagger's like the old high school friend who won't go away, leaving the other guy to just accept him as he is.

WWE '13 cover is unveiled
This is one of those segments that really should have worked, but it did. Normally I cringe at the sight of WWE advertising something, but from Big Johnny's gleefully unveiling the unofficial cover featuring himself, to CM Punk's more over-the-top announcement that he was the official cover man for the video game, this one was one pretty enjoyable segment.

Did all this make me want to buy the video game when it comes out? Haha, oh God no, I find them to be awful. I wouldn't even buy it if a limited edition Big Johnny version of the game came out.

CM Punk vs. Daniel Bryan
I said there was nothing left to say about the matches the tag team champs have had against Ziggler and Swagger, and the same can be said for CM Punk and Daniel Bryan. These two are incapable of having a bad match together.

This was a nice surprise as the match wasn't advertised until just over 20 minutes or so into Raw, but even matches that feel last minute are still really fun to watch. What I liked about this match especially was the clean finish. I was afraid Kane would come out and attack Bryan, but thankfully that came after the match.

I don't know what to make of the Kane situation. He's an odd person to put into this Bryan/Punk feud to say the least. Through all that though, I was relived to see Punk attack Kane as well, because that means that it won't be just a Bryan/Kane feud. Instead, it means that Kane might play the filler roll in this angle to stretch out the feud between Bryan and Punk. If that's the case, then I'm all for it.

Sheamus vs. David Otunga
Does anyone really believe that Otunga can beat any top star when he says he will? Yeah, didn't think so.

Anyway, a fairly nothing match here. David has improved over the past year or so, but even in matches like this he can really fail to deliver in any way.

Also, an interference from Alberto Del Rio after the match would have been nice. With the Mexican Aristocrat in line to face Sheamus for the World Heavyweight title in a few weeks time, adding some heat to the upcoming match wouldn't be so bad. Even if that heat comes from a cheap beat down.

Big Show vs. Brodus Clay
For the first time since his debut, I got excited to see Brodus Clay. After his serious altercation with Big Show earlier in the night, I was looking forward to seeing a different side to the Funkasaurus.

Unfortunately though, that didn't happen, as the match never got under way. Instead, we saw Big Show deliver a beat down on him. Although I was looking forward to see Brodus in action, the beat down actually came off extremely well.

Big Show man handling Brodus (as well as the tag team champs) made him look like a complete bad ass. Everything from his spear to Brodus, his Choke Slam like move on Truth towards the rope, to him flinging Kofi through the barricade, came off so well.

It's a bit of a shame to see Big Show look dangerous at the expense of three other wrestlers, but when the segment comes off the well then it's hard to complain that much.

Overall, this was a good way to cap off a pretty enjoyable episode of Raw.