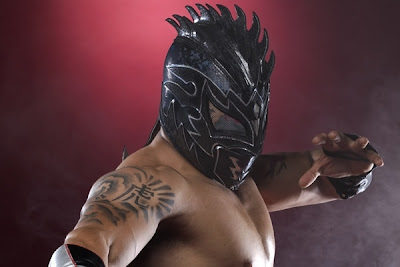 One of today's big stories is that high flyer Samuray del Sol as signed for WWE. It is a news story has has been rumoured for  quite a while, but superluchas.net has reported that the Lucha star has finally signed with World Wrestling Entertainment and will be heading to NXT soon enough.

A source very reliable and has Superluchas.net Confirmed . The young, talented and stunning Mexican-American air fighter that has impacted the globe, "Warrior More Agile in the Ring" Samuray del Sol , 1.68 m tall and 82 kg, AND signed a lucrative contract with the company Development WWE apparently for 1 Million Dollars at Year.


And it is that very quote that brings me to my next post. While WWE seems to be pretty high on high flyers at the moment (ugh, that was unintentional), I'm finding it hard to believe that WWE would sign someone like him to such a lubricative deal.

When WWF signed Brock Lesnar in 2000, it was rumoured that his deal was pretty big. And it kind of makes sense as well. Brock, after winning the NCAA Heavyweight championship at such a young age, was something of a bright prospect for the whole wrestling world. The sky was the limit for the incredibly talent athlete and WWF took the first plunge by signing him up to a long term contract rumoured to be in the millions.

For someone like Samuray del Sol though, it just doesn't add up. He's a guy who isn't exactly in demand at the moment. While he's a big independent star, there really isn't anywhere else he can go in North America that is as big as WWE, so the thought of them paying that much for him is something I feel should be taken with a pinch of salt.

The rest is fairly easy to believe though. A few months a go he was rumoured to have done a medical with WWE, along with Sami Callihan, who is now of course signed with them. So while the contract talk seems a bit fishy, the rest seems legit enough.

It is a signing that I'm, quite happy about as well. I've honestly never seen anything from del Sol before, but I've heard enough good things about the young Indie star. He fits the mould of the type of high flyers WWE seem to be after these days, and as long as he doesn't fall into the Sion Cara spiral of mediocrity he should be a great addition to the WWE.
Posted by Eddie at 09:33