S.C.U.M.’s Reign of ‘Evil’ Is Starting to Run Its Course 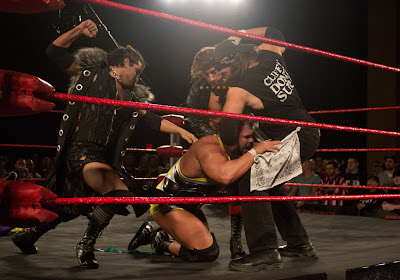 It’s been a long time since Cornette’s vision for ROH came to an end. It was an era which many people were happy to see the back of (including myself), and now seem to be content with Delirious’ booking thus far.
And it has been an improvement. While Delirious was the booker during 2011 and 2012, it seemed that he wasn’t able to fully get his own way with the company. When Cornette left it must have been a little bit of weight off Delerious’ shoulders, and since them we’ve seen steady improvements.
House shows have looked stronger, the wrestlers brought in have been a bit better and the storylines seem to have more to them as well. It is still far removed from what it was like when SBG took over, but ROH have looked a lot more steady this year.
That’s why it’s hard to think why ROH seems better when the main storyline going on has been a direction-less mess. The rise and progression of S.C.U.M. has been of great entertainment for some people, but for me it just doesn’t work.
It hasn’t looked good for a very long time either. Even when Steen was in the what was then 3-man group things just didn’t look right. While Cornette brought his Smokey Mountain vision with him when he left ROH, there still seems to be a sense that the company has lost the edginess that it once had.
When I think of factions in ROH the first that comes to mind is The Age of the Fall. This group, led by S.C.U.M. member Jimmy Jacobs, was a group that had people talking right from the get go. At Ring of Honor’s 2007 event Man Up, the mysterious group made their debut after a gruelling Ladder War between The Briscoes and Steen and Generico. The group beat down on the bloodied Jay Briscoe and proceeded to hang him upside down from the ceiling, using the strap used to hold the belts. The motionless Briscoe dripped blood onto the ring mat as The Age of the Fall stood in the ring.
It was a debut that made an immediate impact. It was so shocking that ROH found themselves taking the footage out of the show which was due to air on PPV two months later. While it might be too much to ask for S.C.U.M. to do something similar, it’s been clear that the group has done nothing at all shocking since they formed.
S.C.U.M. seem to lack that heat and ruthlessness to really look like a threat to ROH. For a faction that is meant to take down ROH, they’ve been booked as a bunch of menaces up to no good.
When Kevin Steen won the ROH World title at Border Wars last year it looked like S.C.U.M. was finally looking to take over. But while Steen’s reign itself was pretty enjoyable, no such thing happened.
Even when Jacobs and Corino managed to win the Tag Team titles a few months later nothing really happened. A group who’s intention was to take down Ring of Honor weren’t doing anything. They defended their titles every time they booked, cheated a little, and had the annoying Kevin Kelly outraged that they would steal a win in a match with very little at stake
Again, things looked like they might be heading in the right direction, when before the 11th Anniversary Show this past February, Corino pledged that S.C.U.M’s numbers would grow. Unfortunately though, that’s all that happened – S.C.U.M.’s numbers grew. They didn’t look any more menacing than when it was just a three man group, their attempts to take down ROH became even more non-existent, and the only development so far has been that Corino is now colour commentator.
I know it’s hard to build a storyline around a group of people looking to take the company down, while also booking a normal wrestling show, and I think it’s been a problem that Delerious has not been fully able to manage. The Age of the Fall were a group that weren’t looking to end ROH, so it was much easier to manage. They were able to look strong without the overall product being revolved around them.
With Steen out of the group S.C.U.M look even less intimidating. And at this stage I feel it’s a matter of going all out with the storyline or deciding to end it as soon as possible. There’s been hints of Adam Cole turning heel and joining S.C.U.M but that remains to be seen. If he does join the group, they should go on and have him win the ROH World title. From there it should be a matter of taking the company under their control. Not only should they hold the World title, but they should hold all the titles as well. They should do what ROH thought they were doing in 2012 and take the company hostage. If this storyline is to work they need to go all out. They need to do what they did in 2006 with CZW and make that the only focus.
If they don’t do that then I feel they should just end the stable once and for all. Even if Adam Cole eventually joins S.C.U.M., it needs to be a case where they actually build from there. They simply can’t be a force to be reckoned with when they don’t do anything even remotely bad. A few beat downs and interferences simply isn’t enough.

This video from Rhett Titus rightly sums up the direction of S.C.U.M. He talks like a villain you’d see in a cheesy, second rate TV show, and when you add on those cheap transitions at the end of the video they look like more of a joke than anything. It may seem harsh, but it’s true. The “flames” he talks about that will burn ROH down have been nowhere to be seen. And while they may talk about it all they want, it’s been nothing but what that little match light is in that video – a storyline that shows a group talk big, but who’s impact has been nothing but a whimper.
___________
And on a side note, this article is now available on a new site I'm posting on called WrestlingRambles.com
The stuff I post on that site will mostly be got to do with Indie wrestling, so I won't be writing daily on it like I will here, but it's a really good site that's worth checking out.
Posted by Eddie at 07:49