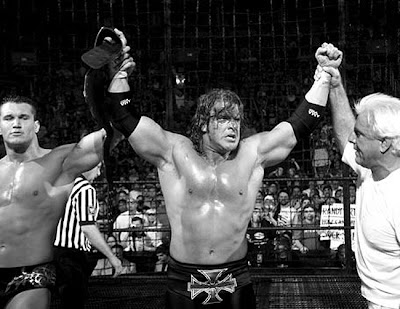 I almost went in stages in what to watch this week, even though it was kind of unintentional. I started off the week my watching a little bit from the Young Bucks vs. Rick Knox feud from PWG that happened last year. It wasn't exactly a must-see feud, and it wasn't the sole focus when it came to the Young Bucks, but it is involved in some really fun matches from that year.

I then moved onto a bit of the Bryan Danielson vs. The World DVD, which I've been slowly getting my way through. This time I watched some of his stuff during Ring of Honor's 2007 tour of Japan, and competes in two enjoyable matches.

Finally, I watched the second Elimination Chamber match for the first time, after I pretty much just stumbled upon on YouTube. As far as I know that's every Chamber match I've seen now, but might look through the list just to make sure. I almost hope I haven't seen them all, because it really is one of my favourite stipulation matches from WWE. Even in today's PG world it's still a match that can be highly enjoyable, and at times, just plain barbaric.

Triple Threat Ladder Match : The Young Bucks vs. Super Smash Bros. vs. Future Shock - PWG Threemendous III (2012)
Words cannot describe how much I love this match. Since getting the DVD late last year I've watched the match three time, there's just something about. The hectic action, the atmosphere, the commentary (I think Excalibur and Steen set a record for most swear words said in a match), the perfect execution of nearly ever move; it's all just so much fun.

Whatever about ring psychology and storytelling, this match doesn't need any of that to make this hugely enjoyable. It doesn't matter that everyone in this match fights back after only minutes of basically nearly dying, because it really helps with the overall pacing of the match-up. And really, that's what it's all about with multi-man Ladder matches - it's all about the action. The Hardys, Dudley's and E&C did it perfectly over 10 years ago, and these three teams did it here.

In terms of action and just all round excitement, I'd almost put this match right up their with the classics seen from the three WWF teams I listed above. It has violence, great athleticism, tons of 'Holy Shit' moments, and even a bit of comedy as well. It's basically everything you could ask for. 9/10

6-Man Tag Team Match: El Generico, Kevin Steen & Rick Knox vs. The Young Bucks & Brian Cage - PWG Battle of Los Angeles 2012, Night 2
Originally scheduled for a 3-on-2 Handicap match, and was for a while as well, until Kevin Steen came to the aid of Knox and Generico. That's when the match really kicked into another gear as well.

The match was fine up until that point though. The Young Bucks showed their dominance over the referee Rick Knox, and El Generico struggled to take on all three opponents. When Steen came in things got a bit more fast paced, and like nearly every tag team match, became Tornado rules with everyone popping into the ring.

What made this match so enjoyable was Rick Knox's performance itself. The crowd were firmly behind him, and in the end gave them a lot to cheer about when he delivered some highly impressive moves on his arch Nemesis' The Young Bucks. The protected him well in the early goings, and then let him pull out all his guns in a really entertaining final few moments of the match. Great stuff all round. 8/10

Singles Match: Bryan Danielson vs. Go Shiozaki - ROH Live in Tokyo (2007)
Not the best Bryan Danielson match from 2007, but still a terrific match against the highly talented Go Shiozaki. The match started off very well, with both men keeping things on the mat for the most part. Danielson won most of the exchanges and managed to hurt the left arm of Shiozaki, which he then went onto sell brilliantly for the remainder of the match.

From there it had very good pacing, as both men did a great job of knowing exactly when to kick things into another gear, before going back to a slower pace. While the match had a few sloppy bits here and there, it still served up some great action whereby the crowd were fully behind Shiozaki's comebacks against Danielson. His comebacks were also the highlight of the match as well, as both men contested in some great back-and-forth sequences in the second half of the bout. Well worth a watch if you can find it. 8/10

6-Man Tag Team Match: Bryan Danielson, CIMA & Naomichi Marafuji vs. Davey Richards, Rocky Romero & Masaaki Mochizuki - ROH Live in Osaka (2007)
Another bout here from ROH's tour of Japan in 2007, this time seeing Danielson compete in a 6-Man Tag Team match. While the match took place in front of a less than excited Osaka crowd, all six men managed to on some solid action.

The match was so enough to start off with, every man from both teams getting involved in a feeling out process against their opponents. It was a stage in the match that probably went on a bit too long, but thankfully got a bit more grounded as it progressed.

Richards and Romero did a good job of getting a little bit of heat throughout the match, which in turn helped home turf favourites Marafuji and CIMA get a good reaction whenever inside the ring. It was enough to get a good heel vs face dynamic in front of a crowd that was pretty content with both teams at the start of the match.

After a few hit and miss hot tags the match picked up to another gear with all six men getting in some good action. The action was fast and fluid, and really mad the match more exciting heading into the final few minutes of the match. That alone was enough to make this a really enjoyable match overall. 7/10

Elimination Chamber Match: Triple H vs. Shawn Michaels vs. Goldberg vs. Chris Jericho vs. Randy Orton vs. Kevin Nash - WWE SummerSlam 2003
Although I said at the top of this column how much I like Elimination Chamber matches, this is arguably one of its weaker matches. There's not exactly a whole lot wrong with it, and there is a good bit to like about it to be fair. It had some good heelish behaviour from Triple H, some decent spots throughout, and a fun Goldberg rampage in the later stages of the match.

Overall it just seemed to lack that extra kick to make it a great match. Triple H's injury harnessed his involvement, with Nash's fitness and age doing the same. The eliminations were also a bit sudden at times, even the final one which saw Triple H hit Goldberg over the head with a Sledgehammer after an attempted Spear. The idea behind it was certainly good, but at that point in the match it only seemed to be kicking off between Triple H and Goldberg.

You could probably find worse Chamber matches in its 10 year hesitance, but this certainly isn't one of the better ones. A real hit and miss type of match. 6/10
Posted by Eddie at 15:56