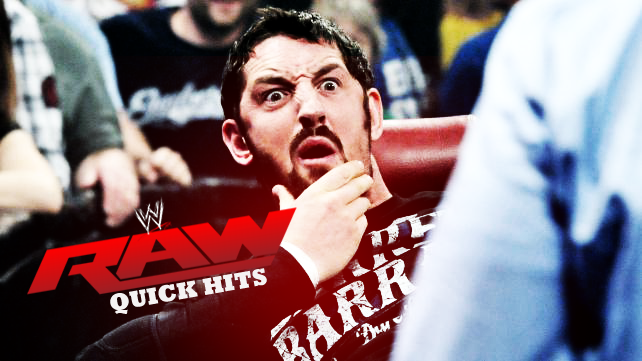 Hit - Bryan's Corporate Makeover
This was a segment I was quite looking forward to if I'm honest, and in the end it really delivered. It was a great indication of just how over Daniel Bryan is with the WWE fans and how they don't want him to conform to the WWE's corporate preference. Despite looking pretty sharp in his suit and with his hair combed back in a ponytail, the fans don't want him to change.

It was in this segment where we also saw a very good promo from Bryan himself. It took a while to get there, but we finally saw Bryan (and Cena) delve a little bit deeper heading into their match at SummerSlam. Bryan criticizing Cena's status in the WWE franchise, as well as showing his passion as a "wrestler" was really great to see, and the fans were behind every word he said.

The rest of the segment went by pretty well also. Vince McMahon got to exchange a little bit more with Bryan himself, and we also got to see Wade Barrett's "U wot m8?!" face after getting a bit of his beard shaved off. It was all good stuff.

Hit - Del Rio Loses, Kills Ricardo
After coming back from a "serious injury" (of drugs!), Ricardo returned at the side of Del Rio, only to cost the World champion the match. I wasn't really happy to see Alberto lose once again, but I suppose it made sense for why he'd attack his sidekick, which in the end made for a fun segment.

This leaves us with a few questions going into SummerSlam, and beyond. Does RVD deserve to be included in the World title match at SummerSlam? I think it'd make the match a lot better, especially since the card is already fairly singles heavy.

Also, what now for Ricardo? It wouldn't surprise me if he ends up in the corner of Christian (if it remains a one-on-one contest), followed by him going into singles action himself. I think the change was probably needed for him in the end (and not because his stuff with Alberto got stale exactly) and I'm looking forward to seeing what he does next.

Miss - Stop Acting Like a Dick, Cody
I haven't watched such a frustrating feud in a long time. For all of the good stuff between Sandow and Cody (The gulf of Mexico segment was definitely a year highlight, much thanks to Sandow's antics), but it's been marred so many times by strange writing.

Last week we probably saw the worst of the lot, as Cody retrieved the briefcase from the Gulf of Mexico. Fine, so maybe set up a 'winner keeps briefcase' match there on the spot? Or, you know, tease Sandow into getting his briefcase back, only to beat him up a little and throw it towards him without the contract inside.

It makes me wonder who creative are booking as the heel and face here, because last night it was a helpless Sandow left without his briefcase, while Cody grinned and showed it off to a crowd, who at that stage, could do nothing but sit there in a hushed silence.

Hit - Cena's Promo
It doesn't happen often, but John Cena cut a really great promo last night. It was serious, straight to the point, and had that extra little spice which his other ones generally lack.

For the first time since WrestleMania 28, Cena spoke like someone full of confidence. He didn't talk like the underdog who was going to give it his best shot, he spoke like an 11-time champion who said that Daniel Bryan has no chance of winning at SummerSlam. Those few lines directed at Daniel Bryan, and his contentment at being a big deal in the indie wrestling worlds, brought about that little edge which I felt the build-up needed.

That, as well as Bryan's promo earlier on in the night, has shoved the 'we all respect each other immensely' to the side a tiny bit, leaving open a bit more stuff for fans to bite on.

Hit and Miss - Layla's Heelish Behaviour
So, after turning heel we've seen a whole new side to Layla, and really, one that I like. For me, she never really made for a good face, and for the past year or so all she's seemed to have done was act 'best friend' to whoever was around her. Her heel persona though, I like. For the most part.

I like that she's just straight up acting like a bitch. I don't care that her reason for turning on Kaitlyn because she wants attention, because it was something that just needed to happen straight away. What I do care about though, are some of her antics. For a few moments during last night's match she looked like she was trying to express her crazy side, between skipping and weirdly crawling along the rope. Simply put, there's only one room for a crazy person, and that's AJ. He other mannerisms are fine, and of course, really, really hot, but I think it's best she doesn't channel the crazy side of her.

Hit - Brock Smash
Another very good brawl between the SummerSlam opponents. Both guys (as well as Cole commentary during it, I might add) did a great job of showing the underdog Punk try to topple the beast Brock Lesnar. The brawl was fast, vicious and told the story without any talking needed.

The aspect of Heyman being the distraction near the end was also a nice touch, and another talking point going into SummerSlam. This entire thing is as much about Punk and Heyman as it is about Punk and Lesnar, and so far I think they've done a very good job of balancing that.

Miss - Six-Man Mess
A match and segment which really should have been a lot better, but sadly just wasn't. The early DQ could have been handled a lot better (seriously, how is two guys breaking up a submission move considered enough to warrant a disqualification?), but the worst came afterwards when Randy nearly cashed in on John Cena.

Why did The Shield come out to make the save? Well, no one really knows. You could argue that it was them stopping an injustice from happening, since Cena was helpless, but that shouldn't be up to us to guess. If that was their intention then they should have expressed it better, otherwise it looked like the came back into the ring for nothing.

And really, that's probably all they did. To stop Orton from cashing in at that moment, they decided to throw in The Shield for no reason. The whole thing wasn't a big deal of course, and will pretty much be forgotten about soon, but it was still a pretty poor ending.
Posted by Eddie at 16:36