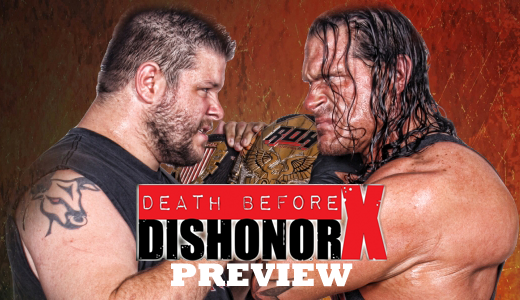 I guess it was bound to happen eventually. All year we've seen young wrestlers make there way into ROH for a couple of shows, helping to lower the value of each that came around.

Meanwhile, the iPPVs weren't too bad in that aspect. There were a few young stars on the past few iPPVs this year but not enough to overthrow a card stacked with more established ROH stars than what looked like developmental stars more than anything.

As I said, it was bound to happen eventually. This Saturday, ROH hosts their annual 'Death Before Dishonor', a show that's been consistently great for years. This year though, the good run could possibly end.

While the card is still containing some great wrestlers, it's hard to ignore how many newcomers are on the card. Irish Airborne, Silas Young, Tadarius Thomas, ACH and even Mike Mondo, Caprice Coleman and Cedric Alexander to a lesser extent.

Looking at all those new guys, who most of which probably won't even get a permanent spot on the roster, is it really best to have them all showcased on iPPV?

Aren't iPPVs meant to have a big night feel? We all know ROH are certainly capable of pulling off such a feel to their shows, but this one just seems a tad lazy.

You have the likes of The Young Bucks and TJ Perkins still on their 'Summer break' from Ring of Honor but are nowhere to be seen on this card. Instead, we're greeted with people most of us haven't even heard of.

Maybe ROH are acting a big cheap and don't want to splash some cash on some of the more well known, and regular names. Or maybe they really want to give these young guys a chance on PPV. Really, whatever it is, it's still not exactly a proposal that appeals to many ROH fans.

I'm sure the show will be good. The likes of Kevin Steen, Adam Cole and Michael Elgin will surely deliver on the night, and I'm sure one or two of the younger wrestlers will catch the eye of fans. But, it just doesn't feel like enough.

If I was able to watch WWE's Night of Champions on Sunday I probably wouldn't need my fix and so, wouldn't need to order this PPV. But, I need to see one wrestling show before I go back to college on Monday so this will have to do. I swear to God ROH, if you waste my Saturday night I'll... probably keep giving you money. But God dammit, I'll be even more reluctant to do so.

“MATT HARDY RETURNS TO ROH!!!”
The reason this is in quotations is because, well, it's taken directly from the ROH website. Myself, I wouldn't put the announcement in bold capital letters, and the not one, not two, but three exclamation marks is a bit much but hey, whatever gets them excited.

You have to wonder if this is what ROH thinks will get people to buy the PPV. I mean, at the end of the day it's only Matt Hardy. I don't mind him being in Chicago for the show though, just as long as that it doesn't lead to anything. Lord knows that the last thing ROH needs is another that's just being booked because he's well known. ROH should know that big names don't men big draws, but unfortunately I don't think they know that. If ROH keep this going they'll be like TNA in 2006 in no time.

The mix between Roderick's quickness and Elgin's strength works very well together, and there chemistry together is effortless. Also, they're both hard-hitting wrestlers who can get a reaction out of a crowd – together, they can get big reactions.

I get that Elgin has to turn face considering the reaction he is getting, but it is still a shame to see him break up with Roderick (it sounds like they're dating, doesn't it?) It would have been cool to see them break away from The House of Truth together (now it sounds like a love story) and turn face, thus ensuring that they can still be a unit (OK, now I'm just messing).

Anyway, despite all that, this match-up should still be entertaining. I don't know anything about Irish Airborne so I really can't comment on them, but I don't think it matters who Strong and Elgin face.

Jay Lethal vs. Homicide
I don't think I could care any less about this match if I tried. I know that Jay Lethal is good, but there's still just something about him I don't like. And as for Homicide, well, I know why I don't like him.

In terms of expectations, it's kind easy to know what to expect. A 10 minute match filled with the ever under-motivated Homicide working on Jay Lethal, with Lethal then coming back and getting the victory with a Lethal Injection out of nowhere*

That's fine for people that are fans of both of these men. But for those that aren't, it'll probably just be usual thing you'd see from them.

*Honestly, don't count on me getting that prediction right. I'm generally wrong about these types of things. A lot.

Survival of the Fittest Qualifying match
Tadarius Tomas vs. Silas Young
Two people I simply don't know, so it's hard to say a whole lot on this match. From ROHwrestling.com's preview of the PPV, I see that Tadarius Tomas is an expert on Capoeira, so if he's anything like Eddy from Tekken then we're sure to be in for a treat.

And then there's Silas Young, who although has competed in ROH a few times over the years, I still don't know anything about him.

With Tadarius Tomas having competed most recently on ROH on SBG, I suppose I'll go with him to get the victory.

ACH vs. Kyle O'Reilly
ACH makes his ROH debut against the highly annoying, yet highly talented Kyle O'Reilly. Like at 'Caged Hostility' over a week ago, don't be surprised if Davey Richards comes to ringside to watch Kyle in action once again.

If it does happen I don't expect him to cost Kyle the win, but I would expect their story to be developed a bit more. Again, if it happens.

ROH World Television Championship
Adam Cole vs. Mike Mondo
Despite not being a fan of Mike Mondo, I'm remaining optimistic about this match tomorrow night. That's because since his debut in ROH, Mike Mondo has been involved in some very solid matches according to many fans. The first came in a match against Davey Richards a while ago which went to a time limit draw, while the other against Roderick Strong at Boiling Point proved to be a very entertaining opening bout.

I'm also optimistic about this match because he's facing the TV champion, Adam Cole. Adam has been on a roll in 2012, easily becoming one of the most exciting young wrestlers on the independent circuit, so it's fair to say that we're not going to be treated to anything less than a good match.

New ROH World Tag Team Champions Will Be Crowned
If ever there was an indication that the tag team division is very weak, this is it. While this tournament will surely have its high points, its hard to see it being anything but average at best.

While the semi-finals feature the ever great Briscoes as well as the unique team of Jimmy Jacobs and Steve Corino, there's also the bland Caprice Coleman and Cedric Alexander (C&C), as well as the unfamiliar pairing of Charlie Haas and Rhett Titus.

That's why the semi-finals might not be anything great. First up we have Jacobs and Corino against C&C, a match-up that may not light the world on fire. While Caprice and Cedric have clearly worked hard to make an impression in ROH since their debut, they're still a team that just don't seem to have that spark.

Next up there's The Briscoes vs. Charlie Haas and Rhett Titus, a match that almost feels all too familiar. In 2011 we saw a big Briscoes vs. ANX feud, and in mid 2011 to mid 2012, we saw a Briscoes vs. WGTT feud as well. The pairing of Titus and Haas, while new, just just doesn't feel that fresh thanks to who they're facing. The match should be good, even if Haas and Titus might find it hard to get good chemistry as a team.

After the finals, I see it being Corino and Jacobs taking on The Briscoes. This is where it gets promising. An established team against a paring that is helping create havoc in ROH. It's a good match-up (if it happens of course) and could make for a solid bout.

As for the winner, it's hard seeing it going to The Briscoes once again. And with Kevin Steen on a rampage as World champion, it would be fitting to have Corino and Jacobs join him as Tag Team champions as well.

ROH World Championship
Kevin Steen vs. Rhino
In what has been a pretty underrated title run thus far, Jim Cornette has picked yet another challenger to Kevin Steen's World championship, the “War Machine” Rhino.

While I've not always been the biggest fan of Rhino, I have been impressed with his latest run in ROH. He looks focused, determined, and is surprisingly over with most ROH fans in attendance.

Tomorrow night, he takes on Kevin Steen, in what should be an interesting contest. Both men are generally more suited to facing people slightly smaller than them, but both men should still be capable of working well together.

Is it the most captivating main event for a Death Before Dishonor show? Probably not. But, they could have gone with worse.

I expect there to be a good few interferences in this bout. On Rhino's side we have Truth Martini and possibly Roderick Strong, while over on Steen's side we have Steve Corino and Jimmy Jacobs. This could be very much be like Steen's defence at Best in the World in the way that there'll be a lot of outside interferences, and may also be like his last defence against Eddie Kingston in that it'll be two heavyweights putting on a hard-hitting match.

I'm optimistic that this will be another solid title defence from Kevin Steen, and I hope I'm right. It's a match that could very well make or break the PPV.