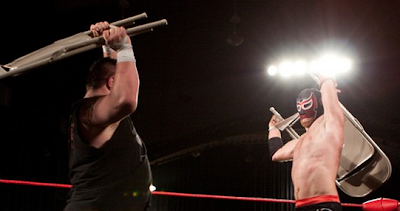 Well, that was a pretty hectic weekend wasn't it? And I don't mean just wrestling wise, I mean out of sync, power shortages, livid tweeting and complaining wise. What started off as a weekend filled with great wrestling action, turned into a weekend that was simple all over the place.

Friday night I sat down at my computer to watch night 1 of Showdown in the Sun. The show came on, the crowd looked lively and the arena was very nice looking. Everything looked very smooth... apart from the, you know, sync issues...which, you know, kinda ruined everything.

I don't know who's worse, Go Fight Live for making such schoolboy errors, or me for waiting up until 2:30 am thinking that maybe, just maybe they'd sort everything out after they went to a quick intermission. Because of all of this, I had to watch Night 1 the day after, and also had to skip watching Night 2 live because I wanted to watch the last 2 matches (that weren't uploaded until after Night 2) first.

Yes, production wise, the weekend was a complete mess. Between the audio issues and power shortages, it was almost harder for the viewers to put up with it all than the wrestlers putting on a show.

Through all this though, both shows proved to be highly entertaining. The crowd were up for it all night (for both nights) and the wrestlers worked their asses off to put on two fun WrestleMania weekend shows.

I said in the preview that I didn't know TMDK, so it came as a nice surprise to see how entertaining they are to watch. The match was fast paced, and featured some fantastic spots to get the crowd on their feet. A good choice to have this as the opening contest. Let's hope that this isn't the last time we see TMDK, because this is a tag team that could add a lot of excitement to the ROH tag team division.

It was a nice surprise to see Adam Pearce make his way out through the curtain, and even better to see him compete against the young and hungry Adam Cole. There was nothing overly special about this match, but it still had some choice moments throughout. The ending with Pearce being stopped from doing the banned Piledriver, only to be caught in a roll up by Cole was a smart way to end the match. It gives Cole an important victory, but still makes the NWA World Champion look strong as he had Cole where he wanted it.

The All Night Express def. The Young Bucks

A Tornado tag match was always going to make things a bit more exciting, especially when its between two tag teams that are so quick and agile. Brawling, high risk spots and super kicks galore made this a pretty fun match, and also set up their match for the day after fairly nicely.

Along with the O'Reilly/Cole match, this was a bout I was really looking forward to. O'Reilly may be unbelievably dull on the mic, and his MMA persona doesn't help his cause with the fans, but you can't deny that he is a very solid wrestler.

The match featured some stellar mat work and scientific wrestling, before turning into an entertaining slugfest with both men looking to get the upper-hand. I felt the ending was a bit flat, but it certainly didn't take anything away from the overall match. A good outing from both men.

I said in the preview Mike Bennett needs other people to get a good match out of him, and I wasn't sure Lance was one of those people. Thankfully though, I was wrong. The 43 year-old veteran showed that he still has all those credentials that made him such a good wrestler in the process. The mat work, high risk offence and close kick outs made this a surprisingly entertaining bout. As for Bennett... he was alright, but it was Storm that really shone through on this occasion.

Are these two people incapable of even having a less than average match? I really don't think so. This was another fantastic bout between two men who work so well together. The tension was there as always, They worked stiff and delivered some outstanding spots throughout the whole match. I knew this match would steal the show (as well as everyone else I'm sure), and thankfully they delivered yet again.

The shock came as a surprise, albeit a anti-climatic one at that. I don't know if it was the crowds lack of interest, but Jimmy Jacobs' turn just didn’t feel that big. He didn't help manners either though, as you could clearly see him reach into his inside pocket when El Generico received the chair, so from there it was just a matter of waiting until Jacobs brought out the spike. The end didn't take away that much from the match, the action was still as good as ever, I just think that maybe it could have been executed better.

Lastly, was the ROH World Title match. The match was as hard-hitting as you'd expect to see, and they wasted little time in going into such a style of match. I thought that it was a bit fast for them to go exchanging chops, kicks and forearms, and to be honest a bit surprising as well.

Of course the match featured some good action, as all 3 men delivered some nice moves and executed impressive submission holds on each other. The crowd also got into the match as well after a quite start, particularly in the last 10 minutes of the match. I don't think I was the only one surprised to find out that it was an Elimination match. People seemed a bit confused when Roddy pinned Eddie with that roll-up, as did myself. Maybe they always advertised it as an elimination match, I don't know, but I was just surprised when Strong got Eddie down for the 3 count.

As for the remaining minutes of the match, they were fine. Davey turned it up a notch and delivered his trademark kicks, with his final one getting the victory. A good match to end the show, nothing more than that.

Decent match here to kick off the show. The crowd didn't seem that into it for some reason, and because of that kind of took away from the match. It's never good to see Generico lose twice in a row, but it's just something that had to be done. Steen is the hottest thing in ROH at the moment, and Jacobs needed a win after turning heel the night before.

Nothing more than a squash match here. Cimapa's knees can be pretty viscous, especially when he slaps his leg and makes that flesh meets flesh sound. It's funny out doing something like that can be the difference in getting a crowd to react more.

From what I saw it was a decent match. Unfortunately the power went out after around 5 minutes into the match. I know TJ won, I don't even know how though.

This was a match I was really looking forward to seeing. It's a shame that no one got to see this match apart from those in attendance. The fact that Cornette (or anyone else) didn't get the commentators to apologies for the inconvenience when then show went back on the air is pretty disgraceful. Seriously, with GFL's lack of commitement to fix things and ROH's quite nature towards this weekends whole fiasco, it just makes everyone look really bad.

I found it really hard to get into this match. Apart from the fact that I really don't like this current feud, WGTT's desperate attempt to get heat at every chance was just annoying. The action was fine inside the ring, but just not enough to hook me. Was also a shame to see WGTT attack The Briscoes after the match. Looks like this feud will being going on another while longer. Oh the joy.

Maybe I only have myself to blame for expecting so much from this match. That';s not to say it wasn't an enjoyable match though, because it really was. It contained some stiff shots and nice action outside the ring especially. If anything, I just think the match could have gone on an extra 4 or 5 minutes. No surprise to see Steen get the victory, with him gunning for a chance at the World Title he needs to be racking up wins in all of his matches.

This was a really surprising result. I know Jay Lethal's reign as champion was getting a tad stale, but I still expected him to retain the title and continue on with his feud against Tomasso Ciampa. Instead we saw Tomasso cost Lethal the title when he rammed him into the ring post.

It just seems strange that they had Ciampa steal Lethal's title, only for Strong to win it at Showdown in the Sun. Maybe they're going along with the angle that Ciampa knew he couldn't beat Lethal, and so, cost him his Championship.

Where to start? Absolutely brilliant match. Start to finish, it was packed with high end action, with stiff shots, fantastic spots and awesome near falls.

Seeing Elgin take everything that Davey had and still fight back with explosive moves of his own made the match so enjoyable. And the expression on Davey's face when he saw Elgin absorb all that punishment and remain standing was a perfect image of how great this match was.

The last ten minutes of the match especially were something to behold. Elgin's one count kick out, the atmosphere around the building, all of it just made such a classic match. Davey needed a match like this, with all the criticism he's gotten about his super serious attitude and tacky MMA training, it was great to see him put on such a good match. A reminder to fans (myself included) on just how good a wrestler he is. And as for Elgin, he was simply fantastic. The star of the show.

The perfect way to cap off a great weekend for Ring of Honor. While it was Night 1 that proved to be the most solid show overall, it was the match between Elgin and Richards that people will remember Showdown in the Sun for.