WWE Over The Limit 2012 Review 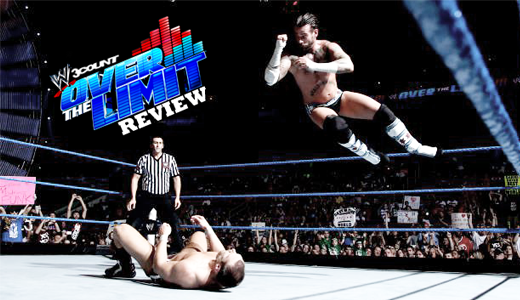 Another PPV has passed, and once again its headlined by Mr. John Cena. Maybe I've missed something along the way, but Cena pouring water down Laurinaitis' trousers just doesn't seem to warrant a main event place, especially compared to Cena's Once in a Lifetime match against The Rock and his Extreme Rules match against Brock Lesnar.

It had the biggest story going into the PPV, but that doesn't mean that it needed to be the last match on the card. Instead of capping off the show with Punk lifting his Championship after a match of the year candidate against Daniel Bryan, we saw Big Show unsurprisingly help Laurinaitis get the win in a fairly anti-climatic ending.

Surely if Cena feuds with Big Show now we won't see them in the main event of a PPV, right? Right?

Pre Show
Battle Royal feat. Michael McGillicutty and more.
Maybe this match just went over time, but anyhow, we were treated to a Battle Royal on TV before the PPV actually started.

Your standard Battle Royal affair. Lots of punches, kicks, wrestlers trying to eliminate others in really unconvincing ways and a few nice spots to get a reaction from the crowd.

Its funny how easy it is to turn someone face in the WWE. The man who spit in Randy Orton's face and annoyed people with his “One more match” promos was cheered because he was cornered by The Miz and David Otunga.

I was happy to see him win however, and was already looking forward to his match with Cody Rhodes at that point.

WWE World Tag Team Championship
Kofi Kingston & R-Truth vs. Dolph Ziggler & Jack Swagger
Good opening match. It was slow in parts and really only got going when Kingston and Ziggler were in the ring together, who, despite all there encounters still work really well together.

I was going to say in my preview that I forgot to finish that I was hoping Ziggler would be on the losing side, but only in the hope that he'd get something better as a singles wrestler. He won't be challenging for the title any time soon I'm sure, but I hope we still see something better for him. And as for Swagger, err... yeah.

Divas Championship
Layla vs. Beth Phoenix
I knew that given enough time these two could deliver the goods, and although 7 minutes isn't a whole lot of time, they still managed to put on a good match.

Layla sold her knee injury very well as Beth carried most of the match. They both played there parts equally well though, and put on one of the better Divas matches of the year.

World Heavyweight Championship
Sheamus vs. Randy Orton vs. Chris Jericho vs. Alberto Del Rio
This was a really fun match. The crowd was pretty loud for this match, and really gave off the impression that they didn't know who'd win.

Everyone had their fair share of offence (apart from Del Rio to my knowledge), as they all got in their signature moves to get the crowd off their feet.

The ending could have been better. It came out of nowhere, but in a kind of way that no one in the crowd thought that it'd finish the match. Still though, a solid bout here.

Brodus Clay vs. The Miz
Can The Miz just leave already for The Marine 3? Seriously, I've come to the realisation that maybe Clay squashing him with no big mention from the commentators is what he deserves, because he's been flat for months. Give him time off and see if he can come back with a fresh feel to him.

Oh, and as for the match? Well, lets just say that the Funkasaurus has once again showed that he can't work a long match, even if a long match is just over 4 minutes.

Intercontinental Championship
Christian vs. Cody Rhodes
So, Christian is now a full fledged face, and it only took one night. Not bad. I don't know what to make of it though, as I always thought Christian was better as a heel.

Nonetheless, I was happy to see him win the Intercontinental title, in what was a decent match. I felt it could have gone on longer, but maybe I was asking of too much for a match that was really only thrown together the night before it seems.

WWE Championship
CM Punk vs. Daniel Bryan
When Daniel Bryan won the Beat The Clock challenge a little over 2 weeks ago, the buzz of seeing him face CM Punk lit up instantly. This was a match-up that many people had high expectations for, including me, and last night Punk and Bryan more than lived up to the hype.

This was a brilliant match between two of the best wrestlers in the WWE. Technical wrestling, ring psychology, hard-hitting action, you name it, this match had it all.

The fans were also fantastic for this match. They were split right down the middle, and even the rare “This is awesome” chant was used to give this match an extra special feel to this match.

I loved the way Punk worked on the leg of Bryan, and the way he sold it throughout the whole match. I loved how Bryan viscously went after the ribs of Punk. I loved the back and forth action in the closing moments of the match, as well as the array of submissions and counters that were used. I even liked the finish to the match as well. It made Bryan look strong in defeat and also gives him a reason to demand another shot at the title.

I could simply go on and on about this match, it was that good. Without a doubt one of the best matches of the year.

Ryback vs. Camacho
Nothing but filler here. The match was fine though, as Ryback showed his usual stuff, which I must say, is more entertaining to watch than that from Clay and Tensai.

Seriously though, we went from a mat classic in Bryan vs. Punk to (sorry Ryback and Camacho, I'm just going to skip past you there) a comedy match between John Cena and Big Johnny.

How this managed to get the main event spot is beyond me. There was nothing about this match that screamed “main event”. Not even the Big Show swerve because really, everyone saw it coming (apart from that John Cena fan in first row who had his arms out wide in a shocked stance for a good 10 minutes).

Ironically, the match did get some laughs out of me, but is that what the main purpose was for? I thought it was for Big Show to turn heel and Laurinaitis remain the wormy GM that always seems to win, but the first part of that doesn't didn't come off well at all.

A poor ending to what I thought was a pretty enjoyable PPV.