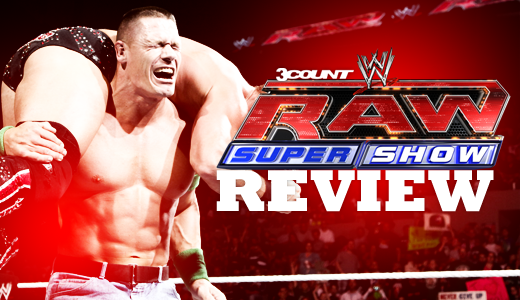 CM Punk vs. Daniel Bryan vs. Kane
It's always good to kick off a show with a match, and they picked a good match to start off the show with as well.

This was a fun little Triple Threat match which saw AJ skip around once more, and Daniel Bryan get the victory over his nemesis CM Punk.

The storyline has been rough in patches, but overall it's been an enjoyable one. At this stage now we have Kane out of the picture and AJ still giving no indication of who she's going to side with at the end of all this (if she does at all).

This feud deserves a good send off, so I just hope it gets one.

Brodus Clay vs. Big Show
I'm not a big fan of Brodus, and I don't think this feud with Big Show will be any good wrestling wise, but it's still good to see him in an actual feud nonetheless.

The match wasn't any good, but did tell a pretty good story of how the veteran still has the upper hand over the Funkasaurus. If this lasts until SummerSlam, it would be great to see Brodus finally get the victory over the giant. If done right, they could make that victory look like a huge achievement for him.

John Cena and Chris Jericho
While both men can cut good promos of course, this one just didn’t do it for me. John delivered the funnies which made a lot of the fans in attendance laugh, but for me, it was just another comedic promo I didn't care about.

Even Jericho's appearance didn't lighten up this segment. The two bickered back and forth but little was said that was in any way entertaining. Of course, they got the message of the Money in the Bank Ladder match across, but still, it was all a bit of a 'meh' segment.

Oh, and apparently Cena infuriated the WWE Universe when he said that most of the viewers are nine years old. Come on though, was it really that bad. What he said clearly just came off the top of his head, and in the end was just a little joke about how many youngsters watch the show. You'd swear he he made a racially homophobic comment with the way people have responded. Seriously, people get on Cena's back for such little things at times.

Why don't they just jump their attention to Randy Orton instead? I mean, he's the guy that supposedly smoked weed a while back. That's right, WEED! WHAT TOTAL INSANITY! GO GET HIM!

Divas Swimsuit Competition.
Ah would you look at them all in their pretty little outfits, they all look lovely. Layla's swimsuit in particular was very nice as it really showed off her lovely bottom. But of course, they ALL have lovelybottoms.

Chris Jericho vs. John Cena
Just when you think it's over, BAM! In comes Big Show to attack John Cena. I get the whole point of Cena entering the Money in the Bank to prevent Big Show from winning it, but this feud doesn't need to get as much attention as it was getting a few weeks ago. I know they only had one segment together but who'd wonder if they'll go back to their usual stuff next week and suffocate the whole show with their faces.

I thought the ending to the feud was fine at No Way Out, there's really no need to continue this thing. Yes, Big Show needs to continue his reign of destruction but does it need to be up to Cena to stop something like this happening again?

While Raw showed some good signs of moving forward, this ending almost brings us back to square one. I'll try to remain optimistic that the Money in the Bank Ladder match will be the main attention here (as well as the WWE title of course) and not just Big Show and John Cena... but, as history shows, that never seems to be the case when Cena is involved.