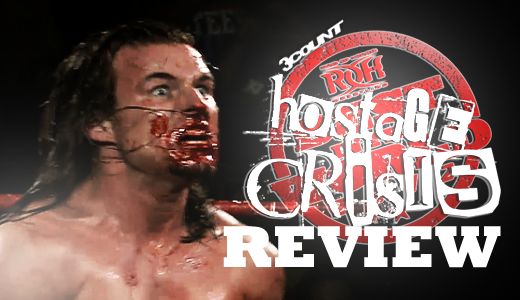 A year ago today I stepped foot into the Hammerstein Ballroom to watch my first ever ROH show, and my first ever show in the US of A. It was pure luck that I was in New York at the time of the event, and even to this day I consider myself very grateful to have gone to a wrestling show in the Big Apple. It was a fantastic show from top to bottom, and a night I don't ever want to forget.

Fast forward to today and I am just back a painfully boring days work. The contrast from last year to today is pretty big. Last year I woke up eagerly awaiting that 4pm start in which the show would come on. This morning, I woke up eagerly (and crankily) awaiting for half 5 to arrive so I could get off work and go home.

Anyway, enough about my miserable misery, I'm here to talk about this year's Best in the World show, which thankfully surpassed people's pessimistic and one eye open expectations.

After 3 goes, ROH finally got it right with their PPV. There were no problems with the live stream and the replay was up quickly and in very high quality. It's safe to say that I'm glad I forked out 12 quid to see the event.

The Guardians themselves did little to impress, and with the bandy ring ropes, The Briscoes had trouble impressing as well. The whole match just didn't click, and at no point was I engaged in the match. It was all just a bit of a mess in the end. *1/2

Eddie Edwards vs. Homicide
At this stage I think I've said numerous times how much I dislike Homicide. I found him stand-able at one time but ever since his returned to ROH in 2010 I think it's fair to say that he hasn't put his heart into his work.

In saying this though, his match with the consistently good Eddie Edwards was a pretty solid bout. Both men worked well together and even though there wasn't anything particularly memorable about the match, it was still a fun watch. ***

Adam Cole vs. Kyle O'Reilly
At Glory By Honor XIII in the Grand Ballroom, Eddie Edwards truly won himself over with the fans when he competed in the dangerous Ladder War with a broken arm. This past Sunday at Best in the World, Adam Cole did the exact same thing when he put in an extremely gutsy effort against Kyle O'Reilly.

The “Hybrid Rules” didn't play a big part in this match, and you’d have to wonder why they even considered such a stipulation in the first place. But really, that isn't the talking point here, and isn't even a criticism, because this match will be remembered for when Adam Cole solidified himself as a top babyface in the company when he wrestled Kyle O'Reilly with his lip hanging down from his face and two of his teeth layed out on the mat.

The match was gory, gruesome and totally glorious as both men but on a fantastic match which totally surpassed my expectations. You don't get many moments like that in wrestling, and that's what made this match so great to watch. ****

Finlay vs. Michael Elgin
At Border Wars this past May, Finlay disappointed many fans when he put on a rather lacklustre (to them, not me) match against Roderick Strong, and sadly, I think even more people were disappointed with his match on Sunday as well.

The match told a great story of the veteran Finlay working on the leg of the powerhouse Michael Elgin, but throughout I think everyone was waiting for it to kick into that extra gear.  The “This is boring” chants were totally uncalled for and pretty damn disrespectful, and I was just waiting for those fans to be shut up when the match picked up steam. But, unfortunately, it never did.

Despite all the build-up, we never saw the monstrous Michael Elgin pick up momentum and change the flow of the match. Instead, we just saw two moves from him near the end, and well, that was it.

With such an anti-climatic ending, you can't help but feel that this match just fell flat. **1/2

ROH Television Championship
Roderick Strong vs. Jay Lethal vs. Tommaso Ciampa
As fans of all three men (not big fans, just fans) I went into this match full of optimism. And while the match did have a ton of work rate and pretty exciting action, I still felt some of the executions could have been better.

I normally pass off a few mistakes, but overall there were just too many for me. Lethal's low super kicks, some glancing blows and a botched finish from Roddy was enough to make me deduct this match down a mark.

I still enjoyed the match, and thought it did a good job of developing the House of Truth and Embassy storyline, but overall it just didn't cut it for me. ***

ROH World Tag Team Championship
Wrestling's Greatest Tag Team vs. All Night Express
When WGTT won the tag team belts earlier this year, it was a clear indication that they were going to pass them along to ANX sometime down the line.

At Best in the World, ANX captured the tag team titles for the first time in a pretty solid bout. WGTT, arguably the best heels in ROH right now, played with the fans and supplied some general heel tactics. With ANX, we saw the fighting spirit and fluid tag team action that they are known for.

Both roles mixed well, as WGTT wore down Rhett Titus, only for Charlie to be caught out with a roll up. The ending wasn't perfect, but it was good enough to cap off a strong match.  ***1/2

ROH World Championship
Kevin Steen vs. Davey Richards
Much like the crowd in Toronto for Border Wars, the New York crowd were hot for “Mr. Wrestling” Kevin Steen.

All the figureheads for this feud were at ringside – Steve Corino, Jimmy Jacobs and even Jim Cornette. With all three men playing part in the match at some point you would think it'd be an overbooked mess, but it actually didn't come across that way at all. All three of them played their little roles nicely, while the champion and challenger put on a highly fun match.

It was filled with intensity, high octane action and some great spots to get the NYC fans up off their seats for much of the match. Everything flowed well together, and so, there's really nothing bad to say about this match. Was it better than their match at Border Wars? It's hard to say. It's definitely on par with it, and maybe even a tad better. But, that's just me still on a buzz from what was a terrific main event. ****

In conclusion, this was a very solid show top-to-bottom. It had it's bad spells, but stellar performances from Adam Cole, Kyle O'Reilly, Kevin Steen and Davey Richards made this a hugely enjoyable show overall.