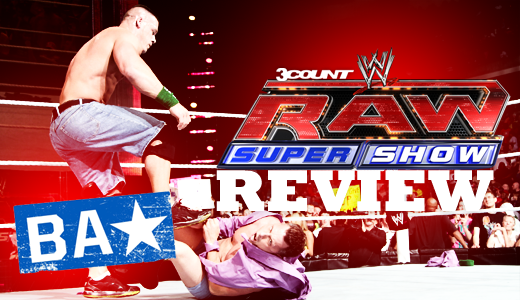 For the first time in years, WWE got it right with Michael Cole. His super babyface approach, followed by his overly annoying heel antics were all something that the fans didn't grow to. No matter what he did, it was hard to like him.

But, combine both together and you get a pretty good commentator. He may not know many wrestling holds, and his knowledge on the key aspects of what makes a good match are a bit off, but in terms of just listening to him, he has been stand-able. He puts over the necessary faces such as Sheamus and Randy Orton, while also sucking up to the heels such as Daniel Bryan and John Laurinaitis in enjoyable fashion.

So, it was because of all that as to why I found the opening of Raw so disappointing. With Cole coming such a long way, I really didn't like the way he went back to being the cowardly heel who was loathed so much last year. For the life of me I don't know why they had this whole episode be around a commentator who shouldn't even be hated so much anymore. If it was to make Cena look like a loveable babyface, then they failed miserably.

A funny thing about this segment however was that Cole, much like Big Show, made some pretty valid points towards John Cena. John came back with some points of his own of course, such as him being confident Big Show would have been rehired after he beat Big Johnny, but oh, would you look at that, it's plot hole #23 in the Cena/Big Show storyline. During Cena's “Loser” promo, it was only after all of joking when he found out that his match with Big Johnny had a stipulation where no interferences were allowed. So really, Cena had no reason to be so confident, and thus, had no reason to be so obnoxious.

Seriously, if Raw continues to kick off with something from this storyline every week then I think I might kick off my reviews with a part entitled the “Cynical Kick Off“, whereby I continue to be pessimistic about this whole angle and also point out it's unbelievably obvious flaws.

Sheamus vs. Dolph Ziggler
While it's good to see Dolph Ziggler compete in bigger matches, I still have to question him losing twice to the World Heavyweight champion in the space of 5 days. They could have easily had Ziggler win the match on Monday Night. Del Rio's attack on Sheamus could have come after he cost the Irishman the match, which in turn, would have made Del Rio look dangerous, given a reason for Sheamus to get a bit more angry, and also would have given Ziggler and important win. All in all it could have been win-win...win.

Despite my slight complaining though, this was still a good match. And as ever, Ziggler sold the Brogue Kick like an absolute champ.

Sin Cara vs. Hunico
Some of Sin Cara's arm drags were a bit ridiculous looking, but to be fair, since his return he's yet to make a real noticeable botch.

The match was alright, although I still stand by my point that Sin Cara doesn't know how to work a WWE style match. And as far as ring psychology goes, I still thinks he lacks it big time.

And to cap off my pessimism, shouldn't his finisher set him up for an armbar, and not a pin?

Big Show Sit-Down Interview
For the first time in this Big Show storyline, I actually have something good to say about it. Big Show's video package was pretty cool.

They went with the same approach they used for Brock Lesnar when he came back, and to be honest, it worked for Big Show as well. He simply looked like a bad-ass in this video.

CM Punk vs. Kane
I'll say it. I still don't like Kane being in this feud with Punk and Bryan. I've said before that my hope and reason for all this is because they want to stretch out the Punk vs. Bryan feud until SummerSlam, and so, are using Kane as filler. But, that might not be it at all.

Despite my reluctance to accept Kane into this feud however, he did put on a solid bout with CM Punk. There was nice action throughout and the crowd seemed really up for it.

Also, the booking was good all round. Bryan didn't play a huge factor in the match, but did enough to cost Punk the match. Kane got the victory, but only through outside distractions, and so, Punk didn't look weak. And lastly, AJ's facial mannerisms continue to be really impressive as she went from being terrified to being pretty damn turned on by Kane looking at her.

I don't think AJ and Kane will hook up (I don't want to be reminded of Kane's last love interest thank you very much), but it's good to keep people guessing as to who she will really side with at No Way Out.

Kofi Kingston & R-Truth vs. Curt Hawkins & Tyler Reks
First off, I was pleased to see Hawkins and Reks compete on Raw. In my opinion, they deserve to be on Raw more, and also deserve to look like a threat in the almost unknown tag team division.

The match though, wasn't so good, and that was thanks to the Tag Team champions. As far as I'm concerned, putting tape over a body part isn't selling an injury. To sell an injury you got you, well, sell it. The tag champs didn't do that. They literally did their usual match and not once played along to the part that they were wrestling injured.

If they didn't have injuries the match would have been fine, but they did in this case. And so, I just couldn't help but look at them no-sell all the abuse they sustained at the hands of Big Show last week.

John Cena vs. Tensai
This Tensai thing isn't working out, is it? By the looks of things, the big man doesn't have a whole lot a time off to come across as a massive threat to anyone in the main event scene. I can't say I'm disappointed though. He may have been OK in Japan, but in the WWE he's just out of shape and not at all entertaining to watch.

Anyway, the man you once defeated John Cena lost to him this past Monday in what was a pretty boring match. And because Cena won the match, it meant that he were going to see him in another one... against Michael Cole. Yay.

John Cena vs. Michael Cole
Listen, the Be A Star logo on my banner for this review was just a subtle joke. As far as I'm concerned, Be A Star is just a thing they do outside the ring, inside the ring they can be dicks all they want. But, why I'm on the subject of dicks, it has to be said that Cena was a major one when he faced Michael Cole.

Seriously, he really had no reason to pick on Cole so much. None at all. But he he did. Because he's a big man.

The whole thing was awful, and just plain disgusting. Tensai came in to attack Cena at one stage, but it all came to nothing, as Cena fought back to defeat Cole. Even today I'm scratching my head as to why they had Tensai attack Cena, only for it to lead nowhere. I am also scratching my head even harder as to why this whole thing with Cole even happened. And to be honest, I don't think we'll ever really find out.

Overall, a decent episode of Raw. We were treated to two solid matches in Ziggler/Sheamus and Punk/Kane, and shown a nice video package featuring The Big Show. But, we were also treated to Cole being doused in BBQ sauce, and let's face it, that's never a nice way to end the show.