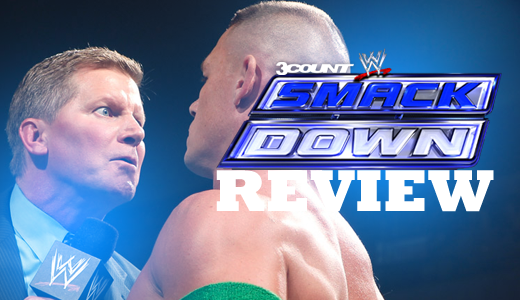 So, the go-home show from Smackdown has passed and now it's just a matter of waiting until tomorrow night. With Raw guy coming over to Smackdown for the night, we got to see every match announced get one more bit of hype.

Some matches needed the hype, some didn't, and and some (well, one) were just hopeless to begin with.

Although it wasn't a Smackdown that made me want to buy tomorrow's PPV (screw you Sky TV and your Sky Box Office, you used to be cool), but it was enough for me to watch a stream of it in the early hours of the night. At this stage, maybe that was the most they could do for me.

Punk, Sheamus, Bryan and Ziggler
This was a nice little segment to open up the show. It wasn't anything special, but it did a good job of giving everyone time to talk and also introducing the main event as the opening match of the night.

CM Punk & Sheamus vs. Daniel Bryan & Ziggler
This was a good match to open up the show as well. In that ring we saw 4 people who are the future (and in many ways the present) of the WWE, and in this match we saw just how well they all work together.

I think it was a good idea to go with Ziggler getting the pin fall over the World Heavyweight champion here. It gave Ziggler some momentum going into the PPV, and may have convinced some people that he could be capturing the gold on Sunday. It also didn't make Sheamus look weak either, as it was the interference from AJ and Vickie that cost him the match.

The post-match happenings were also pretty fun to watch. Kane showed warmth towards AJ, Chokeslammed his two opponents, and looked at AJ on the ramp as she swayed back and forth in an utterly creepy stance.

Brodus Clay
Another good serious promo from Brodus here. His matches may not be anything fun or anything new, but at least they are going somewhere with him.

Otunga's attack on the Funkasaurus looks to be a way for them to feud with one another until Big Show is free from John Cena. Or at least I think so anyway.

Christian vs. Jack Swagger
This match didn't do anything for the feud between Christian and Rhodes, but the video package before that certainly did.

Maybe I shouldn't be so impressed, but I'm just glad that they decided to put some more attention on this feud. That little 2 minute promo was enough to get me excited for their match on Sunday.

Ryback vs. Two Jobbers
Oh, just give him 3 already.

Damien Sandow vs. Tyson Kidd
Surely they could have put Sandow against some else, right? Tyson deserves better than what he's getting these days.

Anyway, I'm waiting for Sandow to compete in a long match. His promos are great, but I'll only fully be a fan of his when I see him in a match longer than 10 minutes.

Big Show, John Laurinaitis & John Cena
In the first hour of the show we saw Big Show cut a good promo concerning Vince McMahon and John Cena. The storyline may be full of crap, but Big Show has actually been pretty impressive on the mic since his heel turn.

And then to cap off the night we had John Cena sucker punch Big Johnny. This was your standard segment, as I feel everything that was needed to be said has been said already. If anything, this was probably just a way to get Cena on Smackdown to try and boost the ratings.

Overall, this was a pretty decent episode of Smackdown. Every feud got enough air time, and for the first time in many months we have a PPV card that actually has more than 5 matches announced before the PPV begins.