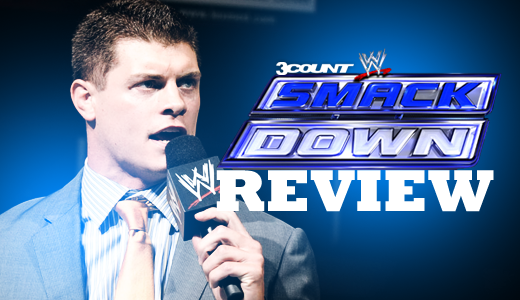 Smackdown has been a victim of no storyline development many times. The evidence of this can be seen only just last March in the run up for WrestleMania. We saw Sheamus and Daniel Bryan hardly have a confrontation throughout their whole build-up, and Randy Orton and Kane making no sense of their little grudge against one another.

I was afraid they were going back into that territory, but thankfully, we've seen some signs of development. Its not the most gripping stuff you'll ever see, but I'm just happy to see the Sheamus/Del Rio feud in a slightly different direction. Seriously, having little things like Ricardo dressing up as Sheamus can do wonders for a feud like this.

The same can be said for the Rhodes/Christian feud, where again, there have been signs of an actual feud going on, and not just some fling where they compete against each other.

As I said, it doesn't exactly make for ground breaking television, and to be honest, I probably shouldn't need to give little praise to the writers for actually writing something slightly more engaging. But, I'll do it anyway, because I'm just happy to see that they're at least doing that right.

Alberto Del Rio, Sheamus & “Sheamus”
This was a fun way to start off the show. Once again Ricardo Rodriguez continues to be the shining light for Alberto's character. I honestly think that without him, Del Rio would find it so hard to get over as that dastardly heel he currently is.

Anyway, Ricardo dressing up as Sheamus was a nice touch, and as always, he made the most of the situation and proved to be pretty funny.

Another thing I liked about this segment was Del Rio once again getting the better of Sheamus by attacking the arm. He didn't exactly stand over him like he did on Monday, but it was enough for him to look dangerous.

And speaking of dangerous, he looked that way against Great Khali as well. I know it's not a big deal when someone beats Khali, but the way he layed into the giant so he would leave himself open for the armbar was nicely done.

Brodus Clay vs. Derrick Bateman
I love the way Clay hasn't been able to get his hands on The Big Show yet, as we'll get to see The Funkasaurus get more livid as the weeks go on. After Cena is done with him (which I hope is soon), then I'd like to see Brodus Clay step in to feud against Show next. It wouldn't be the best feud match-wise, but Brodus would look very strong if he were to topple the giant.

His match with Batmen wasn't anything special, but he did show some good intensity against him. A promising sign of things to come.

Sin Cara vs. Drew McIntyre
I know Drew didn't look exactly bad in defeat here, but what does it even matter? He's clearly not going up the card any time soon. Its a real shame as well, because I always liked McIntyre. I wouldn't consider him to be among the best in the company, but I still find him to be really solid in the ring.

The match here was fine. I have to give credit where credit is due, because Sin Cara looks to have improved since his return. The same moveset is still there of course, but he seems to be a lot more composed in the ring.

Peep Show
Going back to my point at the start of this review, its good to see that Christian and Cody Rhodes are going to get mic time. There was nothing overly special about this segment, but it was still an enjoyable one at that.

Christian’s face turn made sense and came off genuine, while Cody did a good job at coming across as the young star who should have the gold around his waist. Put all that talking in with their matches and you have yourself a pretty solid feud.

Christian vs. Dolph Ziggler
A good match between two people who have good chemistry together inside the ring. Both men delivered some nice offence (although I think they both held back, understandably) while Cody Rhodes did a good job at the announce table.

Again, Ziggler didn't look too weak in defeat, but I still wonder what they're doing with him. Another “up and comer goes on a losing streak” type of storyline is the last thing we need, and the last thing Ziggler needs as well.

Antonio Cesaro vs. Jimmy Uso
I do have wonder where this whole thing with Teddy is actually going to go. It's fine for now, but I'd like to see the talented Swiss do something better in the next couple of months.

Not a good match, as it was terribly quick. Why not just give Cesaro greater competition now? Not every new guy has to beat jobbers (sorry Jimmy) every week to try and make an impression, they could always try something different with Cesaro.

Sheamus vs. Kane
Decent main event year, despite the messy ending. Neither men could exactly afford the loss, so a win for Kane via DQ is good enough.

Again, this grudge between Sheamus and Del Rio continues to heat up. Without doing a whole lot I find myself enjoying this feud, and look forward to seeing how they both do at No Way Out in a week's time.

The main talking points will concern AJ over the next couple of days though. I still don't really know what she's doing with Kane. Is she trying to soften him up a bit from CM Punk. Is she genuinely interested in the Big Red Monster? I honestly don't know, and to be honest, I like not knowing.

Overall, this was a pretty good episode of Smackdown. We got the usual squashes, good storyline development and a few solid bouts. No complaints.