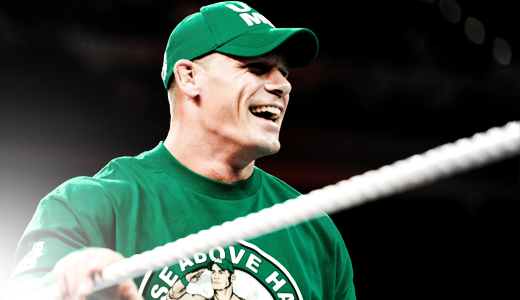 It's no secret that John Cena is the face of the WWE. He has been since 2005. It doesn't matter if he isn't a part of Smackdown, or if he isn't the WWE Champion, because no matter his status, creative always ensure that he is their main star.

While it's always good to see John away from the main event scene, it doesn’t always mean that the focus isn't entirely off of him. Look no further than this year for evidence of that. This year, and up until now, Cena has been out of the WWE title picture. CM Punk is the proud holder of the WWE Championship and has faced many young stars such as Dolph Ziggler and Daniel Bryan throughout his reign. But, through all that, the WWE Champion hasn't been the main focus on the show. Instead, it's all been on John Cena.

At the start of the year, Cena battled Kane in what was a filler feud in many ways, before moving onto his rival The Rock in preparation to their eagerly anticipated match at WrestleMania. One similarity between both of these feuds is that they both main event PPVs. At Elimination Chamber, Cena faced Kane in an Ambulance match, and at WrestleMania, he main evented the show with The Rock.

The difference between both of these though? One was good, and one was very, very bad. Cena's feud with Kane was so dreadful that it dragged the whole show down to their level. Zack Ryder and Eve were thrown into the mix, and CM Punk, the WWE Champion, was left to play second fiddle on the show.

However, the buzz around Cena's feud with The Rock seemed to lighten everyone and everything on Raw. People were looking forward to the 'Once in a Lifetime' encounter more and more as the weeks progressed, while being entertained by the other storylines that were happening as well.

WWE television was good, and one of the main reasons for that was because the Cena and Rock feud was entertaining to watch. Now granted, you could argue that the WWE is generally good leading up to WrestleMania anyway, but it's not the only case where the WWE is good because of a John Cena storyline.

The night after WrestleMania, we were greeted to the shock return of Brock Lesnar. Right off the bat we saw Lesnar deliver and F5 to the poster boy of the company, and thus, setting off a feud between the two right then and there. It was a brilliant storyline. One that got people talking, main evented a PPV and made the entire show enjoyable to watch.

For me, it's no coincidence that the quality of WWE programming depends on what John Cena is doing. If he's feuding with someone like Kane, in a cringe worthy storyline, than the product is going to be pretty poor overall. However, if he's in a good storyline then the show is generally a joy to watch.

One of the main reasons for this is because John Cena is always the main focus. Even if he isn't in the WWE title picture, his feud (whatever feud that may be) is always the one with the most air time. It is the centre fold of the show, and so, if it isn't good, then the entire show isn't going to be good either. Also, if you are very critical of that storyline, then you are generally going to be very critical of the rest of the show (as is the case with me).

Right now, we are in the same type of situation where the WWE is poor because of what John Cena is doing. For weeks now, the main focus on Raw as been highlighted around John Cena, Big Johnny, and Big Show. Mid-carders are getting less air time, the Divas can't even make it onto television right now, the WWE champion is only in one segment a week. While that is all bad in its own right, it wouldn’t be half as bad if John Cena's storyline was actually enjoyable. At least then we would have some quality programming, despite the flaws I noted above. But, unfortunately, it isn't. And Raw as a whole has suffered because of it.

2012 hasn't been the only example of this either. When Cena feuded with Big Show in 2009, we were shown crappy television for weeks on end. Fast forward a year later, and we were treated to a promising Nexus storyline. During this storyline, we saw good WWE television for the whole summer, where Cena formed a 'Team WWE' for his help. But, it went downhill fast when he then went onto fight them on his on again within two weeks, get fired, yet show up any in his knee pads with his music blaring over him.

We've seen it all before, and unfortunately we're at a time where John Cena is in yet another bad storyline that has cast a dark (and boring) cloud over the WWE.