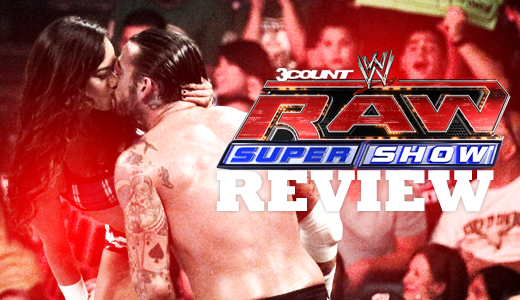 Not long now until we reach that historic 1000th episode of Raw. Until then though, it's going to continue to be a sluggish and progressive walk to July23rd.

Raw has been awfully shite as of late, and this week's show really showed how tame they've been in terms of development. Brock Lesnar is making his announcement at the 1000th episode, the 1000th episode has gotten loads of coverage, and so on.

While it's good to see them hyping up the show, they just seem to be waiting idly by until it finally arrives.

Still though, this was still a pretty solid episode. There wasn't a whole lot in terms of storyline development, and there's certainly been better weeks, but overall it all just went by at a nice pace.

Opening Segment
There was something about this segment that seemed all too familiar. Wrestlers talking for the sake of it, entrance themes going off every two minutes, and catchphrases being thrown out left, right and centre. Yeah, this segment felt a lot like something you'd see in the Attitude Era ... minus the smut, crudeness and rowdiness from the fans of course.

This segment didn't really serve any purpose, as everyone involved just blabbed on about nothing, but I think that's what made it so fun to watch.

8-Man Tag Team Match
Much like the opening segment, so much happened without that much even happening.

This clustered tag team match ended like most matches featuring Otunga i.e. Otunga getting pinned. And while it made sense for everyone to pick on the former associate of John Laurinaitis, I didn't really get the whole point of Brodus Clay coming out.

Although he had unfinished business from their match at No Way Out, shouldn't he have been more concerned about getting his hands on, or getting the opportunity to get his hands on Big Show?

It seems like Clay's various serious promos concerning Big Show have all been thrown out the window, because on Monday night all of his attention was on the Harvard graduate.

I hope this isn't what I think it is (the end of the Clay/Show feud), but quite frankly, it's looking that way.

Sin Cara vs. Alberto Del Rio
So... has this push for Sin Cara just ended all of a sudden? With Del Rio getting his shot at the World Heavyweight title at Money in the Bank, there really was no point in him attacking Sin Cara.

It didn't make Sin Cara look weak, considering he was jumped from behind (kind of), but you'd still wonder what went through their heads to go with that outcome. Strange stuff.

Sheamus & AJ vs. Dolph Ziggler & Vickie Guerrero
Another Raw, another episode filtered with lots of AJ. This week we saw her team up with the Great White to take on Ziggler and Vickie, and although she was the one that got the pin, and the final camera shot before it cut to commercial (or a backstage segment, I forget), it was thankfully a match that mostly featured the efforts from Sheamus and Dolph Ziggler.

AJ got some in ring action, Sheamus looked strong as always and Ziggler lost but didn’t get pinned. Good stuff all round I suppose.

Tyson Kidd vs. Tensai
First Tyson Kidd beat Jack Swagger and now this... things are definitely looking up for him, and it's about time as well.

Although it was a total fluke win it's still good to see Tyson get some momentum going into Money in the Bank; well, kind off. The attack backstage didn't do him any favours but really that was just for Tensai, who continues to be stuck in a rut.

In true WWE fan pessimism fashion, I was afraid that the backstage attack was for Tyson to be pulled out of the MITB Ladder match due to “injury”, but thankfully it just appears I was getting way over my head.

CM Punk & John Cena vs. Daniel Bryan & Chris Jericho
Teddy Long announces a tag team match! And surprisingly enough, it was a fine one at that.

All four men put on a really solid main event match, particularly when it was left to just Punk and Bryan. AJ's appearance in the match came as no surprise, but everything definitely came off well here.

The crazy chick surrounded the ring much to Punk and Bryan's lack of acknowledgement. Her reaction to getting no attention was golden and really showed how she's one of the best in the WWE for animated expressions. This then led to a rather strange table spot that still came off pretty well, despite some obvious flaws such as how AJ could possibly think it could come off so perfectly as it did.

Once again though, we're left wandering who she's going to side with at Money in the Bank, which of course is a good thing. And this time, it was the best storyline in the WWE at the moment that got the fitting end to the show.