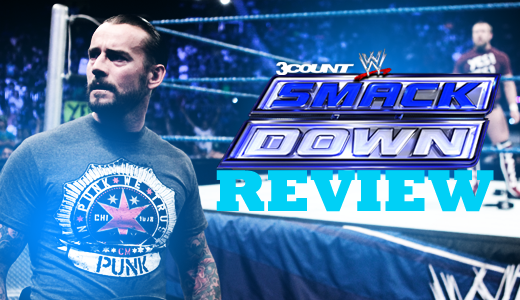 It's official: I hate holiday episodes of Smackdown. 4th of July, Halloween, Thanksgiving, even Christmas, they're all just filled with ridiculously bad backstage parties featuring mid-carders who aren't being used on the show.

Maybe I'm being really cynical here, but that's just how I feel. It's all just so lame, so very, very lame.

They can continue to have these parties, but only if they're behind closed doors so I don't have to see people like Kaitlyn and Derrick Bateman dance in a poorly designed studio-like room. Man, work has made me really grumpy, hasn't it?

Sheamus & Alberto Del Rio
A good way to start off the show here, even though Alberto's promo was very JBL-esque in the way that he was picking on the “Mexicanimmigrants”. Seriously, I always try to point out that Del Rio isn't the “Mexican JBL” but they really aren't doing themselves any favours here.

Anyway, despite that, Del Rio got some good heat here and also got to deliver a vicious beatdown on the World Heavyweight champion. This feud needs that bit of an edge to enhance the storyline so here's to hoping that they keep this up.

Antonio Cesaro & Aksana vs. The Great Khali & Layla
A pretty nothing match here featuring a man that deserves so much more at the moment, and no, I'm not talking about The Great Khali.

Not only does he need more air time, but he deserves some mic time as well. The guy can talk, and could easily get over as a heel towards the always patriotic fans in attendance. Right now, there's no reason for people to dislike him. The only thing he's done that's even been remotely heelish was when he made out with Aksana in front of Teddy Long.

He needs to be more arrogant, and although I don't really like stereotypes in wrestling, he needs to be “very European”.

Christian vs. Cody Rhodes
Well, it was obvious that Rhodes was going to win this match and get into the Money in the Bank Ladder match eventually but this was still a good watch.

While Christian didn't sell his shoulder injury at No Way Out a few weeks ago, he did here, and it played a nice part in this match.

Also, it was good to see Cody get a clean win. I know heels are supposed to get cheap wins but in Cody's case, he needs some solid victories under his belt as well.

Michael Cole Interviews AJ
I didn’t think there’s was anything bad about this segment, even Michael Cole flattering himself in front of AJ was entertaining to watch.

However, things really did pick up when Cole left the ring leaving the people inside the love -triangle in the ring. Like always, AJ acted a bit crazy, Bryan, the big sleazeball that he is, tried to suck up to AJ once more, and Punk tried to talk some sense into her once again.

It was everything you'd expect from these three, and again, like always, it ended on an entertaining note. AJ locked lips with Daniel Bryan much to Punk's disgust, only for him to get sloppy seconds, much to my disgust.

Another strange moment in this very strange storyline.

Ryback vs. Curt Hawkins
FINALLY, Ryback got an actual opponent in Curt Hawkins. However, the match might as well have been against just another local talent.

It was nothing new from Ryback, but I guess they just want to make him look as strong as possible by having him beat superstars with as much ease as his previous opponents.

Battle Royal
While I generally hate Battle Royals, this one was actually pretty good. It had your usual crap, such as the little scuffles at the edge of the ropes, and the two big men squaring off in the middle of the ring, but thanks to the hot Texas crowd this was a good watch.

The ending moments of the match were particularly good, even though the end result wasn't much to my liking that much. While it was good to see Ryder get the victory (and get some revenge on Kane), I still feel the victory could have gone to someone like Alberto Del Rio, who could have used his power as GM to torment the World Heavyweight champion Sheamus.

Instead, I just think it'll be Ryder taking part in some ridiculous backstage segments while announcing a match here and there. I guess I could put up with that though, just as long as he doesn't host some lame party backstage in celebration of his win.