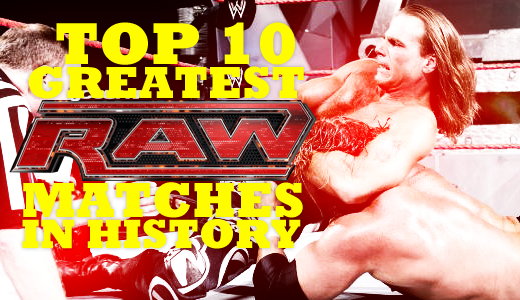 With so much crap going on with Raw at the moment you'd forget that the flagship show of the WWE has held some classic matches. Whether it being grudge matches, exhibition matches, title matches or ladder matches, you name it, Raw has played host to them.

As, after seeing WWE.com's list of the 50 greatest Raw matches ever, I thought I'd do one of my own. So, with that in mind, here is my list of the Top 10 Greatest Raw Matches In History.

It had an extremely hot crowd in attendance, an underdog in Mankind who no one thought would win, a whole lot of drama, and it's significance helped Raw overtake WCW in the Monday Night Wars.

It was everything many people liked about the Attitude Era. Brawling action, interferences everywhere, and a shocking win that got everyone up off their seats.

This was a fantastic match filled with great technical wrestling and brilliant ring psychology from both men. Although the ending wasn't the best, it doesn't take anything away from what was an historic match on Monday Night Raw.

#8: Edge vs. Randy Orton – 30 April, 2007
On this very night, Raw kicked off with something you wouldn't usually expect - a wrestling match. And what a match it was.

Edge and Randy Orton put on a highly entertaining match that surprised many people (including myself) in terms of how quality it was. Not many Raw's have started off with a match, let alone such a good one, so it came as a delightful surprise to see the show start off with such a thrilling contest.

Eddie Guerrero and Rob Van Dam put on a great bout for the Intercontinental championship. The match was filled with some excellent spots, nice storytelling and a great ending to cap it all off. Despite some minor (and I mean minor) mistakes and an interference from an idiot of a fan (“He's a Canadian, what do you expect, JR?!”), this was a really good match from start to finish.

#6: Undertaker vs. Jeff Hardy – 1 July, 2002
Undertaker raising Jeff Hardy's hand post match while shaking his head at the guts of the young high-flyer really sums up this match.

It was the powerhouse, the WWE Champion, The Undertaker vs. the risk taker, Jeff Hardy who still had a lot to prove.

Both men gelled really well together in what was a truly great match. Jeff Hardy played his role of the underdog extremely well as he tried desperately to reach the title hanging from the ring, yet it was the veteran who came out on top in a hard fought effort.

It was the perfect match-up of size vs. speed, powerhouse vs. high flyer and the veteran vs. the up and comer.

In what was a fairly standard WWF title match in many ways between a main eventer and a mid-carder, turned into something so much more as the underdog got the victory (sort of) in a great match.

Yes, the ending overall angered a lot of people, but you just can;t take away from what was a highly entertaining match.

#4: Kurt Angle vs. Shawn Michaels – 3 October, 2005
Months after hosting a thrilling match at WrestleMania 21, the Olympic Gold Medalist and the Showstopper took to the squared circle once again in what was a fantastic bout from two of the best wrestlers ever.

This was a great back and forth match that had everything you could ask for from two excellent wrestlers. The 30 minutes absolutely flew by and the ending made both men look very strong. In cases like this, the draw was the right decision.

No matter how many times that had faces each other up until this point, this was still a superb match that not only showed HBK's qualities throughout, but also showed that Triple H could hang with the Heartbreak Kid in every aspect of wrestling.

A truly great match that you could watch over and over again.

#2: TLC IV
The first ever Raw Roulette wasn't anything special overall, but what it did play host to however, was the excellent TLC IV match.

As far as the high standards of TLC's go, this holds it's own with the rest of them. It had great spots, high octane action and a hot crowd that was eating up every moment of it.

Funnily enough, I turned off my replay of Raw after finding out that this classic went on for an hour because back then the thought of watching Cena work such a long match just didn't appeal to me. However, after a few months I sat down and watched it and well, it truly was an outstanding match.

Some say that HBK carried this match, but I think they're just people that can't admit that Cena was in such a great match. John more than held his own against The Showstopper and both men put on a classic match that will truly be hard to top.