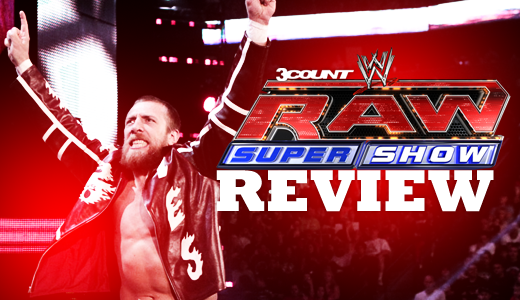 I hate when WWE gets into moods like this. The type of moods where they feel like going with short matches, silly comedy segments (if you could even call them that), and feel good moments that leave everyone going home happy.

All of that was the case this week as we saw nothing but lazy writing all round. The show had its moments, but those moments only came from the only storyline that's good at the moment, the Bryan/Punk/AJ love triangle.

Raw is falling into an all too familiar pattern whereby you feel like you're watching the same episode every week. It's a dangerous territory, and a very repetitive one at that for the fans.

AJ, Daniel Bryan & CM Punk
After watching this segment I had a lot to be positive about for the rest of the episode, because this was a near perfect segment between all three of them.

Everything about it came off so well. They managed to get the message across once again that AJ hasn't fully decided on who she wants to side with, and also showed how different Punk and Bryan were in their approach to the whole situation.

The proposals were totally nuts but simply fantastic at the same time. AJ showed that she still has feelings for Punk, and Bryan showed how low he'll stoop to get his hands on the WWE championship.

Even the little things about this segment worked, such as AJ getting impatient almost immediately after calling out CM Punk, only to lighten up when his music hit, to Daniel Bryan holding his heart as AJ skipped up the ramp in an almost romantic gesture of how much he cares for her. Everything about this segment just clicked, and was all highly entertaining.

Dolph Ziggler & Tensai vs. Tyson Kidd & Christian
The first of many short matches on Raw. There's simply nothing much to say about the match itself as it was over in an instant, but there's a few talking points in terms of the result and the post match stuff.

Firstly, Tensai, for the first time in weeks, looked like a threat. His nasty splash on Christian followed by his Powerbomb to Kidd on the apron after the match made him look very strong, while the other two that I just mentioned didn't really look weak (despite Christian losing so easily).

Also, I'm sure everyone saw the look Vickie gave Tensai. To be honest, I'm not sure what to think of it, as it would definitely be an unusual pairing. However, if she were to leave Dolph for him I'd be all for it, because I think The Showoff has shown that he's more than capable to both get heat and carry himself without her anymore.

John Cena & Kane vs. Big Show & Chris Jericho
First off, it's good to see Kane and John Cena have settled their differences. Personally, if Cena AA'd me off an ambulance I wouldn't let him off that easily, but that's just me.

The match was fine, right up until Big Show got DQ'd for... breaking up a count. Seriously, I actually have nothing to say about that. I simply give up.

Jerry Lawler vs. Michael Cole
Surely WWE rigged the voting on this match, right? Because there is no way only 25% voted “no” for Lawler/Cole II, although maybe I'm just underestimating the annoyance of the casual WWE fan these days.

Everything about this segment was so bad. Why have Cole act like a heel again when for months he's calmed down? Why have him win the match to bring even more heat his way? And finally, why... why did they decide to go with Hornswoggle as the Anonymous GM of Raw this whole time? Why? As I said above, I give up. I tap out. I submit.

Daniel Bryan & Eve vs. CM Punk & AJ
Much like the opening segment, the closing one ended on a high note. The match, albeit very short, was fine and developed the storyline even further.

Daniel Bryan, being the sleazy guy that he is, assisted AJ with the win and then went on to propose to AJ that they leave the building and get married. While it wasn't hard, Bryan was clearly the star of the show here. Everything he did last night was just pure gold.

The episode ended much like the segment ended last week on Smackdown, except the two kissed were replaced with two slaps for both Bryan and Punk. Again, we're left wandering who she's going to side with, which in my opinion is very good to see indeed.

Overall... well, it was a really poor Raw. Take away the WWE title storyline and you have yourself nothing but 2 hours of complete crap. And I'm being generous here.