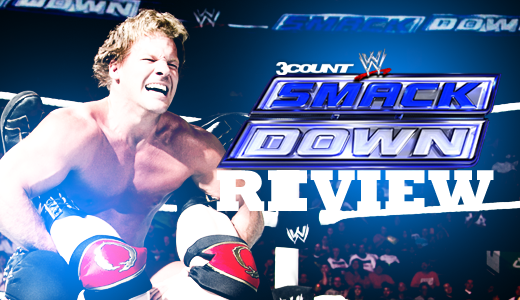 This road to Money in the Bank has felt like an eternity. Inconsistencies, plot holes, bad storylines and not enough action has made the past couple of weeks in the WWE Universe very bad indeed. While the WWE has brought us on many roller-coaster rides this year, this past while has felt like we've been put on a roller-coaster from some kind of playground. It's been stop-and-start, at times really cringe, and very, very boring.

But,we're so nearly there. The ride to Money in the Bank and been extremely rough, but this week's Smackdown pulled up rather nicely before this Sunday's PPV. We've all seen better episodes of course, but at this stage I'll take a solid, nice flowing episode in a heart beat.

Alberto Del Rio vs. Sin Cara
A pretty good match here to kick off Smackdown. While Sin Cara can't work well with a lot of wrestlers, Del Rio seems to be one exception. They worked moderately well together (despite some slight mistakes and bad psychology from Sin Cara) and managed to put on a match that was to the liking of the fans in attendance.

The commentators also did a good job of mentioning Del Rio's new found aggressiveness, even though I still don't quite see it. Didn't Del Rio always have a bit of a bad temper? In my opinion, there wasn't a whole lot new from Alberto in that department, apart from a few head-butts here and there. Still though, it's good to see them mentioning it, and goes in well with the Sheamus/Del Rio feud.

Primo vs. Darren Young
An OK bout here. I liked Abraham Washington's Jimmy Hart-esque approach to the match especially as I feel this could really get a reaction out of the crowd during the Primetime Players matches.

In saying that though, they're still not there in terms of getting enough heat. The antics from Washington are fine, but apart from that there's no big reason as to why the fans should hate them. If they want to go that extra step then they should do something simple like attack the very over tag team champions Kofi Kingston and R-Truth. Even something easy like that would give the fans something to boo about.

As for Primo and Epico, well, I guess it's good to see them turn face, as it balances out the amount of good guys and bad guys on the tag team scene.

Christian & Santino Marella vs. Cody Rhodes & Dolph Ziggler
Creative have done a good job of making everyone in the Smackdown MITB Ladder match look fairly strong leading up to Sunday's PPV. With Dolph Ziggler getting the win by pinning Santino Marella, I THINK that makes everyone that's gotten a victory in the build-up to Money in the Bank.

I could be wrong, but I'm far to lazy to see if I am, so until someone proves me wrong, I'm right!

Damien Sandow vs. Justin Gabriel
The only person that seems to be out of the loop in this MITB Ladder match. While everyone else has been facing other at least once, Sandow has been left out completely. He needed to get into the mix with ever other competitor in my opinion, because beating people like Justin Gabriel in such short matches has done nothing for him.

Yes, you could say that he's at the stage we're he's too new to lose, and also too new to get a victory over someone relatively big, but you have to start somewhere. And with him being in such a big match at MITB, you'd feel they should have pushed him that little bit more on Smackdown over the past number of weeks.

Sheamus vs. Chris Jericho
One in a while you always just come across a little gem, and this week, I think it's fair to say we came across one.

Sheamus and Chris Jericho had a fantastic final 2 fight at the Royal Rumble this year, competed in a fun Fatal-4-Way match at Over The Limit, and now put on a really solid bout on Smackdown.

While it wasn't the most exciting match you'll ever see, I thought it did well in telling the story of the veteran trying to tame the aggressive champion, and for most of the match succeeding.

Chris Jericho worked on Sheamus' back for a lot of the match, with Sheamus fighting back desperately. It was the case of Jericho outsmarting and out wrestling Sheamus, only to get caught with the Brogue Kick out of nowhere. Jericho put over another wrestler, and Sheamus got another realistic hard fought victory.

To close the show we also got Del Rio attacking Sheamus on the ramp for the second time in a few weeks. Yes, it was a repeat of what he did to Sheamus before he got a concussion, but I don't blame them for just continuing with that 'injured shoulder' angle now
that he's back again. If anything I'm happy they've gone back to it, because as Sheamus proved at Extreme Rules in April, he can sell a shoulder injury very well.

This was the kind of Smackdown that calmed everything down after all the crap that's gone on over the past couple of weeks. So with that, I give this episode a thumbs up.