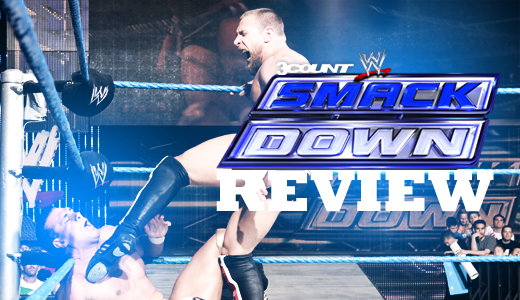 Back off the heels of the 1000th episode of Raw, it was back to business over on Smackdown.

The episode was what you'd expect from the blue brand – squash matches, focus on younger talent and just better matches all round. The last bit was particularly good to see as Raw didn't exactly deliver on that front this week.

The Smackdown poster may lack some depth, but with so much attention on Raw, it's not exactly a bad thing to see Smackdown deliver shows like this. The type of shows where you don't need to tune in every week, but if you do, you're bound to be entertained by some pretty good action.

Intercontinental Championship
The Miz vs. Christian
I think it's fair to say that the Intercontinental title will never reach the heights of prestige that it had many years ago.

They tried to do it with Cody Rhodes, but his long reign was lacklustre throughout. And since then we've seen the title switched around too many times for it to be considered a prestigious title.

Still though, I can't say I care that much, because as long as we get solid, hard fought matches like we did here between Miz and Christian, then I'll gladly accept the IC title as nothing more than what it is – a mid-carders title.

This was a really fun way to open up the show, as Christian and The Miz put on a solid bout. The commentators excitement for this match added that much more to it as well, as they constantly put over both opponents and what it means to be the IC champion.

As I said, if we get matches like this, then I'll be content with how the title is being used.

I actually quite liked this match, mostly because of Mahal's aggression and the way Ryback actually took a little bit of a beating. Will it lead anywhere though? I don't really know, in a matter of just a few days we could be back with Ryback squashing people in one minute. Lets hope that's not the case though.

Sheamus vs. Cody Rhodes
OK, I think we've established that Sheamus is a fighting champion who'll beat anyone that comes in his way. I get that. But, doesn't everyone get that by now? I really don't see why Cody Rhodes had to suffer another clean loss for no real reason.

The introduction of Ziggler in this match (which was fine in many ways) also took all the attention away from Rhodes, and in the end just made him look like any other mid-carder who was eventually going to lose.

The match was fine, but a total miss for me because of how it was all booked.

Santino Marella vs. Antonio Cesaro
The guy may not be in any real storyline, but this thing with Santino is a start at least. It'll be interesting to see if they give Cesaro the title, despite only being here a couple of months, and having yet to get any real heat as a heel. But, if it happens then I'll be happy for him. The hugely talented Antonio deserves a good career here in the WWE, so let's hope a US title win would be a step in the right direction.

Daniel Bryan vs. Alberto Del Rio vs. Rey Mysterio vs. Kane
I'll just say it now – this was a great main event. It was fast, furious, and had fantastic action all round. Everything just came off very smoothly here, and the constant scrambling for that vital pin fall made this a very enjoyable watch.

The finish may indicate that Rey Mysterio may still get into the World title match at SummerSlam, especially with him feuding with the no. 1 contender Del Rio. The only thing that doesn't indicate that however is the fact that the match would have two faces and one heel, something you don't normally see in Triple Threat matches.

It may end up that way, or maybe we'll see another person put into the mix. Either way, I just don't see it being another one-on-one contest between Sheamus and Del Rio here.

Overall, this was a very good episode of Smackdown. It had a very nice pace to it and we were also greeted with two stellar matches as well.

Smackdown may not have the hype or attention that Raw has, but hey, at least they deliver the goods wrestling-wise, right