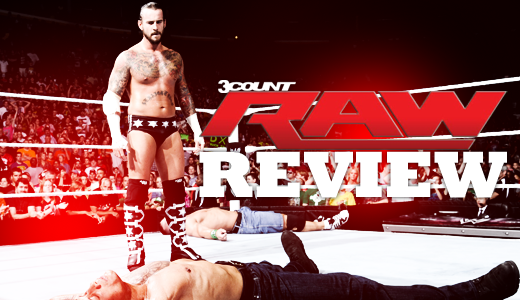 After all the weeks of hype and build up, the monumental 1000th episode of Raw has come and gone, leaving behind good memories, nostalgic returns and new chapters.

With the huge significance of this night, it came as no surprise to see WWE flourish with a new look, and a sense of that 'big night' feel that they can so many times touch on.

In true fashion, we saw the chairman Vince McMahon kick off the show. While McMahon has been criticised so many times for sticking his face in scenes and storylines that didn't need him, it has to be said that he still knows how to make a short and genuine introduction. This was the case here on Monday night as he said a simple “thank you” and got on with the show.

DX Reunion
A fine way to move on from Mr. McMahon's introduction. Triple H and HBK got a thundering reception from the crowd in St. Louis and were with every member of DX throughout the whole segment.

The returns of X-Pac, Billy Gunn and Road Dogg was great to see and the playful antics between all of them made this a pretty fun watch. It was silly, generic and a pretty big time waster, but come on, who's cares about all of that? At the end of the day this was nothing more than a fun reunion that kicked things off nicely for the rest of the night.

I also loved the introduction of Damien Sandow in this segment. It was great to see a younger star being able to rub shoulders with some of the veterans, and I thought WWE made the right call on having that young guy be Sandow – it was the intellect against the pranksters.

I loved Sandow's comic delivery here. Everything from highlighting the fact that he was drastically outnumbered and could be beaten up in an instant, to saying “that's mean” at being left out of the DX huddle. Could they use all of these little comical elements and make them a part of Sandow's gimmick? I think so.

As I said, this was just a fun segment to start off the show.

Sheamus, Rey Mysterio & Sin Cara vs. Alberto Del Rio, Chris Jericho & Dolph Ziggler
A little on the short side but a solid bout nonetheless. A very good ending sequence between Jericho and the World champion Sheamus, as well as a Dolph Ziggler interference to further develop this feud against Chris Jericho.

Brodus Clay vs. Jack Swagger
Mick Foley just doesn't get the reactions he used to get, doesn't he not? It was cool to see Dude Love, but the crowd just didn't seem to care.

He also could have done with being in a segment apart from Brodus Clay. I get the whole 'rubbing shoulders with the young guy/veteran' thing (which did play a nice part in this episode by the way), but who still feel he could have been used better.

Also, I think it's fair to say that Brodus is getting less and less over as the weeks go by. Soon he'll be getting no reaction at all... well actually, I think that's already happened.

Oh, and after being Ryback's match two weeks ago, Jack Swagger went back to jobbing in yet another quick (like, really quick) match. I eh... yeah. Whatever.

Daniel Bryan and AJ Wedding
I was actually really looking forward to this wedding, but in the end I just couldn't help but feel disappointed.

The twist ending that everyone wanted was there, but it still fell a bit short for me. The segment also featured some questions that probably won't ever be answered, such as: Why did AJ have to ditch Bryan at the altar in order to become GM? Couldn't she have done both? And who were those guys in white that Bryan was talking to backstage? As I said, questions that will more than likely be kept unanswered.

The Rock, CM Punk & Daniel Bryan
While the wedding disappointed, things picked up again when the WWE champion, CM Punk and The Rock came into the ring.

This was a really good segment which had Rock rub shoulders with Punk and Bryan (which I still think was pretty surreal seeing the Great One in the ring with two former ROH World champions), and also hype up next year's Royal Rumble PPV by announcing he'd be in the main event for the coveted WWE championship.

It also had the still berate Daniel Bryan receive the Rock Bottom, as well as Punk confidently confronting The Rock saying he'll still be champion by the Royal Rumble. Good stuff all round.

Intercontinental Championship
Christian vs. The Miz
OK, I'm just going to go ahead and say it – Christian, I love ya and all, but seriously, when selling a knee injury please don't just sell it whenever you feel like it. It's annoying. He's done this for weeks now concerning injuries in matches. He gets hurt, sells it a bit, does a frog splash with ease, and then it hurts again after a couple of minutes.

That was the case here when for some reason, his knee gave out when attempting his finisher, even though he was pulling through quite well leading up to it. I may be going a bit overboard with the criticism here, but as an avid fan of ring psychology, it was just too much for me.

The title change was needed. Christian was only bringing it so far and The Miz needs some gold to occupy himself. My admiration for The Miz has gone down considerably over the past couple of months, but I'll accept him as the new Intercontinental champion.

Triple H & Brock Lesnar
Well, it's official – Triple H vs. Brock Lesnar at SummerSlam. People may not like it (“Triple H this, Booker T that”), but I for one am actually really looking forward to this match.

The segment started with the ever great Paul Heyman denying Triple H's challenge on behalf of Brock Lesnar. I think it's been known many times that there's some animosity between these two men, and that actually came off really well here.

The same can be said when Stephanie McMahon came out to confront Paul Heyman. She did a good job of getting under the skin of Heyman, but not such a good job in preventing another lawsuit. I mean seriously, stop attacking the guy.

The segment then capped off nicely with a brawl between Triple H and Brock Lesnar. It could have done with Lesnar getting the upper hand here if I'm honest, as it could play into Triple H thinking what he's gotten himself into, but nonetheless, this was an exciting segment.

Lita vs. Heath Slater
While not exactly the Stone Cold appearance everyone was expecting, I was still very happy to see Lita and the APA.

Kudos to Heath for making what could have been a boring and lacklustre couple of weeks into something so much more enjoyable than expected.

WWE Championship
CM Punk vs. John Cena
Going into this match I was expecting John Cena to capture the title here, resulting in Punk cutting another pipe bomb on how the attention has been on Cena this entire year, despite the fact that he was champion. Instead, we got Punk reclaim the title, but not without turning heel in what was a great ending to the show.

The match was pretty disappointing if I'm honest. It didn't match that big match feel despite the good hype behind it, and didn't get that much time either. When Big Show came out I tried not to believe that they'd end the show with another Big Show beatdown, but thankfully we got an appearance from The Rock.

The last few minutes were simply terrific as Rock was hit with a clothesline from CM Punk, and later fell to the grasp of his GTS.

The Punk heel turn was needed, and also opens up a lot of avenues for him to go into. I think it's fair to say that the next couple of weeks should make for some fun television.