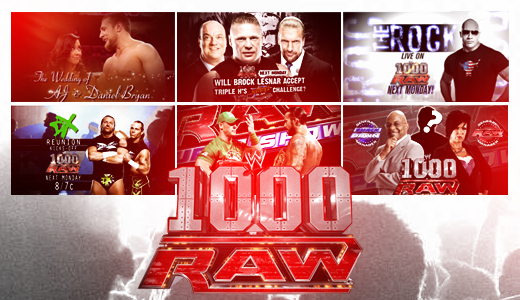 I don't usually post Raw previews (well, never to be more precise), but this week's episode is something of a big deal, isn't it?

Tonight, Raw hosts its 1000 episode, a milestone in television. Raw has had its ups and downs since its inception, but over the course of those 999 episodes, we've witnessed some pretty great stuff - The Stone Cole/Vince McMahon saga, the Helmsley/McMahon Era, Mick Foley's first WWF title win, Chris Jericho's debut, Shane O' Mac's purchase of WCW, the beer truck, The Rock's return last year, Brock's return this year, CM Punk's 'shoot', Mike Adamle, the list goes on and on.

With the line-up Raw has tonight, it would come as no surprise if one of the upcoming segments (or matches) is added to Raw's greatest ever moments. The show is stacked from top-to-bottom with returns, a wedding and a WWE championship match – for the first time in a good while, Raw has a big hype behind it.

So, with that in mind, I thought I'd touch on some of the big talking points going into this historic episode.

Brock Lesnar and DX
Now while these two have been hyped up separately, with Triple H appearing on both segments I expect both of these to come right after one another.

At this stage it's kind of obvious that Brock Lesnar will accept Triple H's challenge, it's just a matter of what Lesnar will do afterwards. Since his return he's been in some pretty cool moments, so you'd expect him to do something controversial tonight, especially since it's the 1000th episode.

If I were to guess, I'd say that Lesnar will attack HBK tonight. Or, if the rumoured returns of X-Pac, Billy Gunn and Road Dogg are true, then we could see a beatdown on them as well. Quite simply, I expect Lesnar to leave an impression on Triple H, but at the expense of the friends around him.

Before Friday, my main prediction for this wedding was Bryan dumping AJ in the middle of the ring, as a way to humiliate and get back at her for what she cost him. But, after seeing Bryan vs. Kane this past week on Smackdown, and the stare AJ gave Kane, my prediction has now turned to a Kane involvement somewhere.

The first prediction could still happen, and I really hope it does, but with SummerSlam not far away they could be going for a feud between Bryan and Kane.

Either way, AJ will not be getting married.

The Rock Returns to Raw
It's hard to say what they're going to do here. We know he's pledged to win the WWE Championship, but who will he be looking to take it off? At this stage, it's probably too early for any bold predictions, especially with a possible title change tonight, so I guess we'll just have to wait and see.

More than an anything though, I just see this just being a another 'thank you' to the fans for being the bestest ever, followed by a few chants that he'll want to trend worldwide, and an announcement concerning the WWE championship to cap things off.

A New General Manager Will Be Revealed
When was the last time we had a good permanent General Manager? No seriously, think back to all the GM's we've had over the years... who's actually been in any way enjoyable? Vickie was OK but lacked that true authority to become great, Teddy Long was beyond repetitive, and the laptop was overly annoying.

By now I think it's fair to say that we deserve a good GM after all the crap we've been put through. Will that happen though? My gut feeling is that we will, but my heart (which has been curb-stomped now by the WWE at this stage) tells me that we'll be left disappointed again.

CM Punk vs. John Cena
As well as the Brock/HHH confrontation, this is what I'm most looking forward to tonight. For the first time in nearly a year, it's Punk vs. Cena.

With both men having so much great chemistry together inside the ring, this really is a match I can't wait to see. And as well as that, there's still no certain way that this match is going to go. Will Punk retain the title, leaving Cena to be the only person to never successfully cash in the MITB? Or will he indeed win the championship for a 12th time?

Me, I'm going for a Cena win here. Many people are predicting a successful Punk defence, but over the past few weeks we've seen little signs of animosity between these two men, and for me, the only way for that animosity to turn into a real feud is for Punk to lose the title.

After to further predict things, I expect Punk to act as the sore loser and turn heel next week, resulting in another “Pipe Bomb” directed at the face of the company, John Cena.