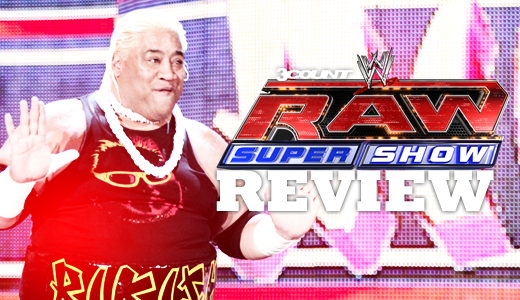 I thought this week's Raw was the 1000th episode. No like, seriously. Yesterday after coming home from work I begrudgingly sat down at my chair to watch Raw. A few minutes in I was like, “Huh, so this isn't the 1000th episode then”.

I don't know why I thought it was the 1000th episode already. Maybe I was so disinterested in the whole episode since the last few weeks have been painful, or maybe it's because I was looking forward to seeing it so much that I thought episode 999 already happened. Who knows... well, actually, I do know, it's because I was so disinterested in the whole thing.

It came as nice surprise because I didn't have to watch waste my entire day watching the show, and also because I could see my the last of the delightful two-hour time slot for the last time (or whenever they realise that 3 hours was a mistake and bring it back).

And do you know what else was a nice surprise? Realising afterwards that this weeks' episode was actually really good. It had good action, new beginnings, and old feuds reignited. The also also did a great job of hyping up the 1000th episode, which after seeing it all, I can now say that I'm really looking forward to next weeks show.

CM Punk and Big Show
While I've disliked many of big Show's promos since his heel turn, I have admit that I found this one to be very good.

He did a great job of getting under the skin of CM Punk, and all in a believable manner. He made his words sounds like real valid points, and because of that, I give this segment a thumbs up.

While the groundwork of the Punk/Cena feud has been building little by little over the past couple of weeks, this was another segment that added a lot to this upcoming storyline.

WWE World Tag Team Championship
Kofi Kingston & R-Truth vs. Prime Time Players
was this match for the Tag Team titles? I'm too lazy to check. Anyway, I thought this was a pretty solid match.

By now I think it's fair to say that the Prime Time Players are the main heels in the tag team division going forward, so let's just hope we see some more matches between these two teams. And on a bloody PPV for once.

Alberto Del Rio vs. Zack Ryder
Deja vu for what feels like the 10th time. Another Del Rio loss at a PPV, another aggressive beatdown on a midcarder the following night on Raw. We've seen it all before.

It looked like another typical Del Rio segment until we were greeted with the return of Rey Mysterio. While I'm not the biggest Rey fan, I thought this was a pretty cool moment, and one that looked like the fans loved.

Rikishi vs. Heath Slater
The surprise return of Rey Mysterio was followed by another surprise as this week's legend return was none other than Rikishi!

As a big fan of Rikishi growing up I found this to be a great moment on Raw, and probably my favourite moment of the night.

We were treated with vintage Rikishi moves and then a post-match dance with his two sons to top it all off. Great stuff all round.

Maybe that's what they want us to believe, so I'll see what I have to say about this whole thing after the marriage happens (or doesn't happen).

It was definitely a surprising moment, and one that opens up another chapter into the Bryan/AJ relationship. It was probably a bit too rushed to have Bryan pop the big question already, but also understandable considering the 1000th episode is next week.

Ryback vs. Jack Swagger
Not so much a match, but anyway. I thought this was a strong segment which did a good job of showing Swagger as Ryback's match.

It's good to see Ryback finally move onto something new, and this little thing with Swagger could actually be fun to watch. A match at SummerSlam would be ideal, but I don't know how long they're going to go with this.

Chris Jericho & Dolph Ziggler
Another segment that opened up a new feud in the works. Things are certainly looking up for Dolph – he's the proud holder of the Smackdown MITB briefcase, and now he gets to move onto a proper feud with none other than Chris Jericho

I guess the Jericho face turn was always coming, and this segment did a good job of not having him turn face straight away. He stood there silently and then shut up Dolph with the Codebreaker, nothing more than that.

CM Punk vs. Big Show
While a reminder of the awful feud between these two men a few years ago, this actually a really good main event. Much like Punk's match against Mark Henry a few months ago, Punk did a great job of playing the fiery babyface playing to his strengths and trying to take down the big man. Everything about this match just clicked.

CM Punk & John Cena
So, before the conclusion of the show we finally heard John Cena's announcement – next week on Raw he's going to cash in his MITB contract against CM Punk. Not the biggest surprise you'll ever hear but still a good moment nonetheless.

I for one am really looking forward to this match. We've seen how well these two work together, and a match between these two will help bring a nice balance on the promo heavy episode next week.

Overall, this was a very strong episode of Raw. The hype for the 1000th episode was in full force, and even a few teasers for SummerSlam match-ups were thrown in as well. Let's hope they can keep it up.