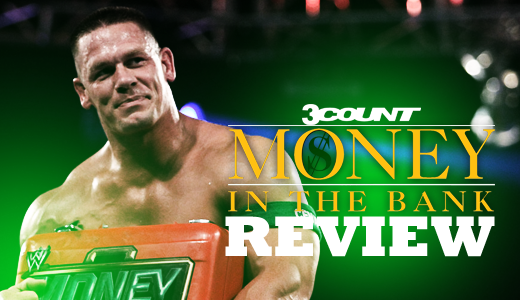 Good, but not great. Those are the words that would best describe this past Sunday's Money in the Bank PPV. While the show didn't have a whole lot of hype, it still had some fairly big expectations considering the people that were involved. And while it didn't disappoint to a large extent, you still feel that this PPV could have been so much more.

It was a good match, BUT, could have been better if there weren't so many little mistakes and if the pace was slowed down for every spot to settle in with the fans.

It was simply spotfest, a clustered and rushed spotfest. It seems like they tried to get everything in the match as fast as possible, and as a result the match brought out a few too many botches that were hard to let off. They were botches that could have been easily avoidable as well.

For me, Tyson Kidd was the star of the match. He seemed to go out on a limb to outshine everyone else, and why not every move of his worked out, you still have to give him credit for trying innovative things. Tensai and Christian were fairly solid, and played their parts in the match fairly well, as did Sandow who although didn't do anything spectacular, had a good sense of ruthlessness about him. Sin Cara was as poor as ever, and surprise, surprise, Santino is afraid of heights. The two favourites, Rhodes and Ziggler, were slightly disappointing in my opinion, although I did like there one-on-one action. The many slugfests between the two really felt like one had to be taken out for the other to succeed.

In the end, it was Ziggler who captured the briefcase to end what was a hit and miss match. ***1/2

World Heavyweight Championship
Sheamus vs. Alberto Del Rio
Much like the Smackdown Money in the Bank, this match just lacked that extra kick. The match was enjoyable throughout, as we saw Del Rio work on the shoulder of the champion for most of the match. However, in the later stages of the match where you were expecting a shift in gears and direction, we were just treated with the ending instead.

While the World title match at Extreme Rules had fantastic action to overshadow the sudden ending, this one just didn't have that. So in the end, it was a rather poor ending for me.

I've enjoyed Sheamus' gutsy title defences, but I still wish there was still a better pay-off to his hard fought victories. This ending just came out of nowhere, but unfortunately, not in a good way. ***1/2

Primo & Epico vs. Prime Time Players
An alright match here to be honest, and certainly the best out of the unannounced filler matches on the card.

There was decent action in the ring, and AW continues to grow on me. The only thing I questioned about this match is the Prime Time Players second loss in a row. Aren't they supposed to be the biggest threat to Kofi and Truth's tag team gold? **1/2

WWE Championship
CM Punk vs. Daniel Bryan
Another match to add to what must be now the never ending list of good Punk/Bryan matches.

A very different match we've seen between these two compared to those at Over The Limit and there first encounter on Raw. This match played in as more of a brawl, as well as an edge of your seat seat match in the way that you didn't know what AJ was going to do.

The match had its hight points, was well paced and told a very good story involving the special guest referee. Without having seen Raw yet, I still don't know what to think of the ending. AJ played with both men and in the end the just called it straight down the middle. We then saw her gaze up at the winner CM Punk, either frustrated that she wasn't the centre of attention, or frustrated that the champ wasn't celebrating with here. Or maybe I'm wrong on both accounts. The ending was a little flat and underwhelming, but it wasn't enough to ruin what was an entertaining match.

I said before that I could watch Bryan and Punk wrestle each other every week, but after many weeks of action between these two I actually think it'd be best to separate these two for a while. It's been a fun, yet almost gruelling storyline, so I'm hoping that when I watch Raw we'll get one last segment with AJ to wrap things up and then have the whole thing put to bed. ****

Ryback vs. Curt Hawkins & Tyler Reks
At least there was something different about this match. For the first time since his debut (well, second debut), we saw Ryback grounded for a few seconds. In the end though, there was nothing exactly good about this match. *1/2

Six Diva Tag Team Match
Layla, Kaitlyn & Tamina Snuka vs. Beth Phoenix, Natalya Neidhart & Eve
Yep, another filler match. I know this isn't exactly commenting on the match, but seriously, why don't creative get up off the asses and just write another storyline involving something like the Tag Team championship? At least then they'll have another match to add to the card before the PPV starts, instead of throwing in short matches that no one cares about.

Anyway, I suppose I should write something about the match. It's funny, this match consisted of 5 good wrestlers (sorry Kaithlyn), yet it was still 3 minutes of crap. *

Raw Money in the Bank Ladder Match
The addition of The Miz into this match was a nice surprise, and actually probably made this match more entertaining.

While this was the match I was least looking forward to, it was still a good match. It wasn't too rushed, it wasn't overcrowded and everyone involved played their parts well.

Overall, this was a pretty lacklustre show. Although it consisted of four matches over 3 stars, as I said at the start, it could have been more. In the end it all just fell a little flat.