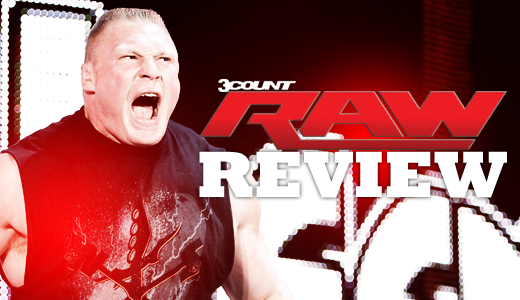 It's cold, I'm tired, and there's wolves after me. Well OK, I'm lying about the last part, but everything else is true. It's been a pretty tiring week at work and coming home at 6 o'clock with Raw still to get through wasn't the greatest feeling in the world.

It's funny how although I love wrestling, and watch it every week, there's still some days where I just cringe at the thought of sitting down and watching it.

Today was one of those days. I'm exhausted, felt like doing other things, but eventually I sat down to watch Raw, which in the end turned out to be pretty good. Just pretty good though. The kind of good that only warrants a small and lazy review.

JTG vs. Ryback
Heh, who knew that some day the first talking point on my Raw review would concern JTG. Kudos to him though, he finally got onto television again.

It was strange how they brought up his Twitter remarks, not so strange how he was squashed by Ryback. It will also be interesting to see where they go with this, more so the mentioning of Twitter remarks than JTG being involved in more squash matches that is.

Piper's Pit
There was a time when the Piper’s Pit featured some really engaging promos filled with Piper himself digging deep into his guests feelings. These days though, Piper just seems to be trying too hard.

We get it, Dolph thinks Jericho's lost it, Jericho himself doesn't. There really was no need to have Roddy here trying to talk about this feud with his point of view.

Quite simply, Roddy Piper was awful in this segment. Between the lacklustre remarks and his overly odd temptations to start “Y2J” chants really slowly, it was all just a hit and a miss.

The Raw Active part was also pretty pointless considering all three men got onto the show eventually. I loved the Ziggler/Jericho feud so far, but this just didn't cut it for me.

Chris Jericho vs. The Miz vs. Dolph Ziggler
Thankfully the bad segment was at least followed by a solid bout between all three men. This was a fun contest which once again had Dolph getting the better of the veteran Chris Jericho.

Out of all the matches at SummerSlam, this is the one I'm looking forward to most.

CM Punk & John Cena vs. Daniel Bryan & Big Show
It was great to see Daniel Bryan involved in this match up. Even though he's not involved in the WWE title picture, it's good to see that he's still considered a big part of the Raw roster.

This was a pretty good match which pretty much achieved all that it set out to do. Big Show was very dominant, while Punk and Cena's interactions of one-upmanship also came off very well.

Daniel Bryan also did an excellent job here as his anger management issues continue to be a joy to watch. His match at SummerSlam may not be of any importance, but his character development over the past couple of weeks has been superb.

Triple H and Brock Lesnar Contract Signing
A great way to cap off the show here. This feud has been lacking that extra spark and the assault on Shawn Michaels at the hands of Brock Lesnar was just the thing to heat things up a bit.

This was exactly what this feud needed, and the perfect way to cap off the show heading into SummerSlam.

As far as go-home shows go, this was a good final stop before SummerSlam. Every match got the necessary amount of attention that was need to hype things up one last time before Sunday.

The show still dragged, but maybe that's just something that needs getting used to.