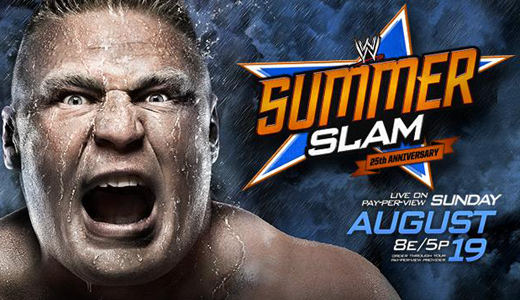 United States Championship
Santino Marella vs. Antonio Cesaro
I know this isn't part of the official SummerSlam card, but I feel this is a match worth talking about.

It has comes as no surprise to see that Santino's reign as US championship has definitely been nothing short of awful. The highly talented comedy superstar has always been used pretty well in patches, but this just isn't one of those occasions. He's hardly been used and more often than not, there have been weeks where I've hardly noticed the belt around his waist.

Tonight he's facing a man who's gotten off to a rough start since his debut, Antonio Cesaro. His lack of mic time and character development has left the fantastic Swiss wrestler with nothing to sink his teeth into. For someone who's supposed to be a heel, he hasn't really been given the chance to show off that fact. Instead, all we've seen is him make out with Aksana in front of Teddy Long as few times. Not exactly something to gain some much needed heat.

It's been known that Santino has been unhappy backstage due to pay and lack of use, while there's been rumours circulating that Cesaro's chance may slip by him (which is strange considering it is the WWE's decision whether he gets that big chance or not).

All of this leads to a title change here, even though this is taking place before the show actually airs. It's hard to say what they'll do – there's signs indicating that he'll be given the ball to run with and signs that Santino will retain his title on the pre-show.

I'm really hoping that we see a Cesaro win here, and am also swaying myself towards that conclusion as well.

WWE Tag Team Championship
Kofi Kingston & R-Truth vs. The Prime Time Players
A.W. Maybe no longer be in the WWE, but that loss still hasn't taken anything away from the team of Darren Young and Titus O'Neil. Yes, they don't have that mouthpiece to gain some heat, but they do still have that charisma, chemistry and that annoyingly great dance to ensure that they can still survive as a solid heel tag team.

If ever there was time to crown new tag team champions, then this is it. The firing of A.W. Hasn't slowed down the momentum of this relatively new tag team, and a title win here would cap off a job well done to two men who were stuck in NXT just a few months ago.

They face a team who's reign has been boring since day one, Kofi Kingston and R-Truth. They may not have anything else to do, but that still doesn't warrant having such a team in the first place. They don't have that chemistry, and they don't have that look of a true tag team. In the end, they're just two black guys that were thrown together because they weren't doing anything else at the time.

Intercontinental Championship
The Miz vs. Rey Mysterio
I've kind of been out of the loop over on Smackdown for the past few weeks so I don't really know what to think of this match. This is clearly just something for both men to do, and a little begrudges thrown in to keep things a little interesting.

Surely we'll see a Miz win here, especially considering he's the next wrestler to bring 'prestige' back to the title etc etc. This should make for a fun title match anyway. I'm not exactly high on both people involved but given enough time this could be a solid bout.

Kane vs. Daniel Bryan
Nothing more than a filler match here, and also just something for Daniel Bryan to do for the night.

These two have locked horns on many occasions last year, but the feud really did set sail shortly before Money in the Bank. If there's anything that sums up this match then it's what we saw last week on Raw, where Daniel Bryan teamed up with Big Show to take on CM Punk and John Cena. No mention of his match with Kane, and no appearance from him either. Daniel Bryan still appears to be a top player on Raw, but since he's not in the WWE title match, this rekindling of the feud with can is just something for Bryan to do on the PPV.

The best, and in many ways most obvious thing to do is have Bryan get the victory here, but knowing WWE they might just resort back to the babyface getting the win. A loss may increase the anger management storyline, which he's so excellently portrayed over the past couple of weeks, but a win certainly wouldn't hinder it either. A win here would show that his technically sound offence and aggressive strikes can actually pay off.

Still though, this is me just hoping more than predicting here. So with that said, I'm predicting Kane to get his hand raised.

Dolph Ziggler vs. Chris Jericho
While the main focus for SummerSlam as been on Triple H/Brock Lesnar and the WWE title picture, this is still an angle that has blossomed into a fantastic feud.

Dolph Ziggler is the brash up and comer taking on the veteran who still think he has something to prove, Chris Jericho. This type of feud may ring bells with many people, but it is still a storyline that feels fresh.

The promos have been perfect on both ends, while the development of this feud as flowed very well going into SummerSlam. There's no denying how good both of these wrestlers are, so it's fair to say that this match up could easily be the match of the night.

Despite his poor PPV record this year, it's hard to see Jericho not put over Ziggler here. Jericho has been brilliant since his return and a loss here would almost be like going out (for another extended break) on a high.

Triple H vs. Brock Lesnar
It's been a nice journey from when Brock Lesnar broke Triple H's arm all those months ago. People have unsurprisingly rolled there eyes at the prospect of Triple H being Lesnar's next opponent, but I myself have been looking forward to this match since it was first announced.

Will it be anything like the classic between Lesnar and Cena? Probably not, but let's not forget that Triple H can really turn it on when he wants to, so a hugely enjoyable bout here wouldn't be a surprise.

The winner here still isn't that clear. Even though Triple H is my favourite wrestler (HHH fan 4 lyfe), the prospect of him winning isn't something that would be a huge shock. And I'm not saying that it would be his 'backstage politics' that would get him the win, but rather the fact that he's remained that persona where he's been as hard to beat as anyone over the past 10 years or so.

In saying that though, Brock Lesnar really should get the win here, and should also look dominant in doing so as well.

World Heavyweight Championship
Sheamus vs. Alberto Del Rio
This is a feud that feels like it's never fully kicked into another gear. For months we've been left with Sheamus and Alberto Del Rio in situations that haven't done anything for them or this feud.

There's been no storyline, no heated rivalry, just two guys where one wants to win the gold, and the other wants to keep it.

We've seen signs of a true grudge forming here and there, but the whole thing has been so inconsistent that whatever segment we've seen used help build up the feud, has just been left to dry up.

The match should still have more of a bite than their previous encounter, but it's hard to see this match being anything more than half decent.

In the end though, it hasn’t quite happened like that. Instead, we've seen a slow transition with CM Punk, where he's not quite a face and he's not quite a heel. This transition has been all well and good, it really has, but it has prevented this WWE title match from having a bit more of an edge to it. A heel CM Punk blazing out pipe bombs everywhere on the way to SummerSlam would have been great, but unfortunately it just hasn't happened that way.

The prospect of Punk vs. Cena at SummerSlam also doesn't sound as appealing as it should because there's another man involved – the 500 pound waste of space, Big Show.

Now, I'm not a Big Show hater by any means, but he just doesn't seem to fit into this storyline at all. He's just unnecessary filler to a match up that would be so much better without him. It's reminiscent of him getting into the World Heavyweight title match with edge and John Cena at WrestleMania 25.

The match really should be good, but it's just lacking that extra spark to make it special. I've been going back and forth as to why I think will win this – CM Punk could easily win but a title win for Cena seems plausible as well.

Royal Rumble is still a long way away, so the prospect of seeing many title changes before then isn't something to pass off lightly. But in saying that, I still see Punk successfully defending his WWE title here. Barely.

This SummerSlam card isn't perfect, but we're sure to get some great action out of this PPV nonetheless. It has some very good match ups with a nice back story behind them, as well as a certain unpredictability on how some of the match might play out.

I won't be able to watch the show live, so my review for the PPV will be up on Tuesday evening after I catch the replay (which I will either watch on TV for €25 or on my computer through some Indian website which shows WWE shows and Bollywood movies. I'm not too sure yet).