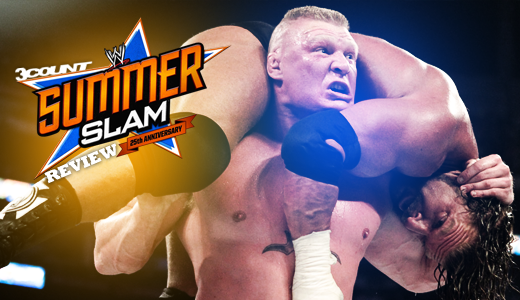 This year's SummerSlam was just like those. There was nothing particularly bad about the show, but in a few years time I know I'll be looking back on the show negatively.

It was a PPV that just never kicked into that second gear. Despite a pretty good crowd, a great set and some good matches, it just didn't have that big night feel that you'd expect from a SummerSlam PPV.

Besides the main event, there's not any major differences between say, this year's SummerSlam and last year's one, yet last year's one ended up being fantastic. The matches weren't THAT much better, but they each had that extra little kick to make it that much more enjoyable. This year's SummerSlam just seemed to lack that extra punch (or kick, or gear... or peddle, whatever).

Chris Jericho vs. Dolph Ziggler
I don't think I should blame myself for expecting too much from these two. We both know how good they are and everyone just expected them to work brilliantly together. In the end though, it just didn't reach those expectations.

It was an enjoyable opener. The crowd were really up for it and it had some good action, but that just couldn’t overshadow the chunky bits throughout. They seemed to lack that bit of chemistry, and because of that the match just didn't flow that well. Despite the near falls and relatively face paced wrestling, there were just too many moments that slowed the match down and made things look a little bit awkward.

I wasn't surprised to see Jericho win, even though I predicted Ziggler, and I think it's fair to say that the Showoff didn't look bad in defeat. ***

Bryan vs. Kane
Although this match had no real hype and no anticipation, this was pretty solid. As ever, Bryan once again showed that he can work with everyone as he put on another good match against the big man Kane.

Daniel Bryan's interaction with the crowd was brilliant, and like the Jericho match, the result wasn't that surprising (again, despite the fact that I predicted a Kane win... shut up).

While Jericho/Ziggler was a bit more exciting, the pacing of this match worked better and was pretty crisp throughout. ***

Intercontinental Championship
The Miz vs. Rey Mysterio
Another good match here, and from two people who I don't really care for. I also didn't care for this match going into the PPV, but in the end it ended up being a good bout.

It didn't have any stand out moments, but everything came off well and also managed to get the crowd pretty excited (which I think really adds to a match). The only fault is that the ending kind of came out of nowhere, and in a bad way I mean. After the near fall Mysterio just jumped for Miz, missed, and then got pinned seconds later. Pretty ant-climatic considering it had the crowd on their feet for the last few minutes.

World Heavyweight Championship
Sheamus vs. Alberto Del Rio
With Sheamus so eager for this rematch after what Del Rio did to him a few week before hand on Smackdown, who'd expect to see Sheamus go all guns blazing towards Alberto. Instead, it was just your standard match between these two.

It was still a good match. Del Rio worked on the arm well, and contained some good action, but you'd think they'd try and make this out to be a bit more heated considering the guild leading up to it.

The match was also damaged my the pretty lame ending. Not only for the fact that Sheamus should have been more convincing in victory after looking to sought revenge, but because it means that this feud will continue. Not good on that front. ***

WWE Tag Team Championship
R-Truth & Kofi Kingston vs. The Prime Time Players
I was hoping that this filler match would at least make it an entertaining filler between the big matches, but it just wasn't to be.

This match pretty much summed up their feud – bland. The match wasn't particularly bad, but it just wasn't good either. It was like your standard match that would be seen on Raw. **1/2

WWE Championship
CM Punk vs. John Cena vs. Big Show
In the preview for this PPV I said that Big Show pretty much downgraded this match up, and in the end, I was completely right.

Big Show did indeed look dominant as both Punk and Cena set their sights on taking him down, but man, that was it. That was the whole match. You'd expect to see something like that in a match, but only for some of it. You might expect for the giant to be taken out for a while so the other two can go at it, but no, this match just didn't have any of that.

Instead, it was just Punk and Cena vs. Big Show. I don't think we saw Punk and Cena thoroughly take on each other during the match.

The lucky win for Punk goes well with his eventual heel turn,but I just don't see why that ending had to come after all that attention on Big Show's dominance.

That whole focus on him should have only been the first act in the match, but instead, it was the whole thing. It was fine for what it was in the end, but for a WWE title match at SummerSlam, you'd expect a lot better than that. ***

Brock Lesnar vs. Triple H
This past April at Extreme Rules, Brock Lesnar faced John Cena in a spectacle not seen in a WWE ring before. It was bloody, brutal and everything about it came off brilliantly.

But, what do you do when you don't want to go in that direction for a match? What if you don't want to see another bloody beatdown that lasts for most of the match? What do you do when you want to focus on an injury rather than an all out pounding. These are all questions that this Lesnar/Triple H match faced. They moved away from the layout of the match at Extreme Rules and layed out their own one. It was different, and focused well on the story that was behind it. Unfortunately though, that plan just wasn't able to top the less thought out plan from Extreme Rules.

While this main event told a great story, it was the kind of match where the fans just had trouble getting behind. In many ways they should have, but for some reason it just didn't spark that reaction that would have given made the match that 'big match feel'.

It also seemed to lack that carnage from the previous Lesnar match. It lacked that blood and chaos which made the previous one so outstanding. This is in no way a bad review for the match, but rather my explanation of why it wasn’t better than it should have been.

The match still had its gruelling action, choice moments and a great ending to the match a well, but in the end it was just lacking that extra kick. In many ways, this match summed up the PPV. A good match that could have been more. ***1/2