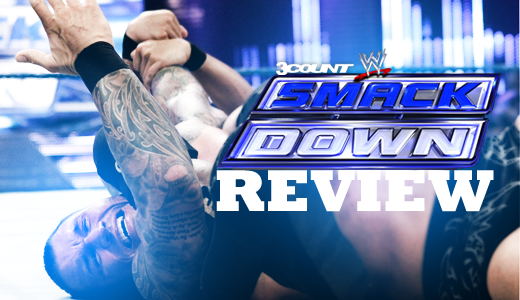 Like Raw, the blue brand is in a bit of a rut at the moment. While the word 'solid' is something that could easily be associated with Smackdown, these days there just seems to be something missing.

It's still 'solid' of course. It's still something different from Raw, and it still has more focus on wrestling, but it's still lacking that genuinely exciting feud or storyline to really engage people into the show.

Nothing going on at the moment has that hook. While the mid-card action is relatively fine, I think it's the main event scene that seems to be dragging the whole show down. That was no more evident after seeing the opening segment of this week's episode, as we saw all three of the main players on Smackdown inside the ring together.

The World Heavyweight title has seen so many scenarios like this. The kind of scenarios where the whole title picture is centred around 'so, who wants a title shot next?' kind of booking. It's not exciting, it's not engaging and in the end it just makes the whole show that much worse.

This week's opening segment was something we've seen so many times before. Orton wants a title shot. Sheamus would gladly give him a title shot. And Alberto Del Rio demands yet another title shot.

This segment was just boring, and while it was used to set up the main event featuring Del Rio and Orton, you'd wonder why they didn't at least try to make it entertaining.

Jinder Mahal vs. Ryback
I was actually quite enjoying this feud. I'm not a fan of either of these men but it was good to see someone come across as a threat to Ryback.

Note why I'm talking in the past tense here. After a feud that's had a good few weeks of build-up, we were left with a 3 minute match to basically end it for good. Jinder has lost all of the momentum that he was slowly building up for weeks, and in the end Ryback's win just looks like any other he's had. A wasted opportunity in many ways.

Seriously though, this has been a good mini-feud for Cody Rhodes. He deserves better in so many ways, but at least this thing with Sin Cara has been mildly entertaining. Only problem is though, I don't see it ending too well for Cody. He seems to pretty much be on the losing end on every feud, so it wouldn't surprise me if they wanted to put over the Mexican high flyer(?) here.

Sheamus vs. Dolph Ziggler
Nothing new here. We seem to have kicked where we left off before the Jericho feud – Ziggler tries to cash in his Money in the bank on Sheamus, but quickly prevents it from happening after Sheamus gets up. Really, I wouldn’t be surprised if they went with the other option next week whereby Sheamus gives Ziggler the Brogue Kick, and thus prevents the briefcase from being cashed in.

The match was fine, if a little underwhelming. Unfortunately the DQ ending came just before things started to pick up.

Antonio Cesaro and Santino Marella
Well this is a bit silly, isn't it? There's some comedy skits I can put up with from the WWE, and some I can't. I guess this is one I can't. Santino's cobra having a life of its own is too much for me.

I don't expect this to last too long, and I certainly hope so as well, because the newly crowned US champion deserves to go on his own path, one where Santino is nowhere to be seen. Have him bring back the European championship. Have him be 'very European'. Or just have him as a cocky champion who can back everything up.

Randy Orton vs. Alberto Del Rio
You see, this is the kind of stuff I want to see from Del Rio. His meaningless attacks on Sin Cara and other mid-carders this year did nothing to further his aggressive persona, but making The Viper tap out to the Cross Arm Breaker? That will certainly help.

Alberto's finisher has always been dangerous looking, but now after seeing him make a top star like Randy tap out, it looks even more dangerous. I don’t know if they'll have make it as vicious looking as the Kimura Lock, but this is good enough for me. For the first time in this Del Rio/Sheamus feud, Del Rio looks like a real threat to the World Heavyweight title.

This is something that should have been done a long time ago. Something small like this was needed for Del Rio months ago when he was struggling to look like a ruthless wrestler. This feud with Sheamus may have run its course, but at least they're going somewhere exciting.

Will Del Rio finally be able to knock off Sheamus and become the new World Heavyweight champion. I think so.