Saturday Morning Slam: Will Parents Be Able To Tell The Difference? 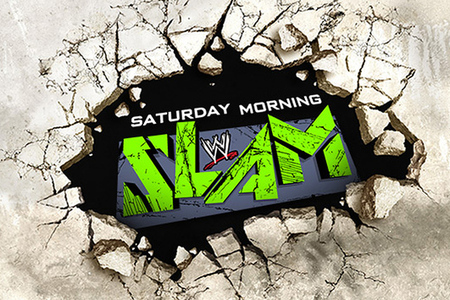 Oh come on, don't look at me like that. I had to watch it. Just one episode. That's it. It was pretty much everything I expected it to be. You know, the current product expect REALLY aimed at children.

It had the Funkasaurus showing off his unbelievably bad dancing skills with his 'I hate this gimmick' body language, a video package of their latest 'Be A Star' rally and a match between Heath Slater and Kofi Kingston.

It was all well and good (albeit a bit weird and creepy), but will parents really be able to tell the difference between this and the likes of Raw and Smackdown?

When it comes to wrestling, there seems to be 3 different types of parents when they encounter their children's urge to watch wrestling: those that allow it, those that don't allow it, and those who just don't give a crap what their kid watches.

For parents that do allow their children to watch it, would they even get what the difference is between say, Saturday Morning Slam and Raw? It almost seems like too much effort to release a new show that the casual fan won't be able to tell the difference from. I could be wrong, but aren't wrestling recap shows shown on weekend mornings? They certainly are over here. So really, why not just stick with those? If parents are fine with their children watching wrestling then why bring out a show centred at kids? What's the point?

Maybe the point of all this is to bring in new fans. But even then, how much would it achieve? If strict parents don't allow their kids to watch WWE, then they certainly aren't going to be convinced by the product on Saturday Morning Slam.

They won't be able to see that a match such as Kingston vs. Slater (which probably broke Rickie Steamboat's record of most arm drags ever done in a match) is a bit tamer than a match that would be seen on an episode of Raw. At the end of the day, it's still two people fighting, and moves not directed at the head or neck won't convince many casual fans that there's a big difference between both products.

So in the end, who's this new show directed at? Kids that would gladly watch WWE Afterburn instead? Strict parents who will just think it's any other show? Kinds won't see the difference because it's still wrestling to them, and parents won't see the difference because they aren't smart enough. And the parents that are smart enough would just let their kids watch any of the product regardless. Is all that really enough to warrant a completely new show? The PG era is in full effect, as new show even more child-friendly just seems a bit unnecessary. Either kids are going to be allowed watch it or they won't. A new show like this will not convince parents otherwise.

Simply put, if you don't get wrestling, then you aren't going to see the difference.
Posted by Eddie at 06:58