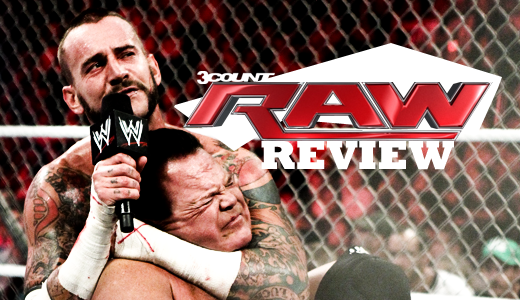 Yeah OK, I get it. Watching Raw live is pretty tough. I used to stay up for Raw quite a bit during the Summer, but up until last night I had never watched a live Raw past episode 1000. I've watched 3 hour episodes of Raw before of course, but they were special episodes such as Raw Roulette and other gimmicky kind of episodes.

This week felt different. It wasn't a special Raw, it was just a normal one. For weeks I heard how hard it was to sit through all those ad breaks and filler segments and I thought, 'could it really be that bad'? And well, it is. It's pretty bad.

This week's Raw wasn't bad, but it really dragged. There's way too many ads and the pacing seems to have slowed down quite a bit (even compared to last week's episode).

I was pretty pessimistic when Raw announced they were going 3 hours, and finally getting to watch it live kind of clarifies that state of mind.

CM Punk & Jerry Lawler
Who knew such and insulting and demeaning promo would make me feel so fuzzy inside. The Jerry Lawler fan-base has gotten smaller and smaller over the past few years and what CM Punk said to the King was what many fans (including myself) have been itching to say for a very long time. Of course I more than likely wouldn't say any of those things if I ever met Lawler but you know what I mean.

What made this promo so good, and also what makes Punk such a good character is that everything he says can be backed up. There's a truth to what he says most of the time, and it is that kind of heel persona that makes him such a joy to watch.

Jerry Lawler had no come back. The whole segment was practically a roast on him and what he's become. Yeah, I'm getting fuzzy all over again just thinking about it.

Layla vs. Natalya
In terms of short Divas matches, this was actually pretty good. You've really got to wonder why Kaithlyn is the number 1 contender for the Divas championship when you have women like Natalya, Eve Torres and Beth Phoenix on the roster.

You've also got to wonder why creative purposely makes the Divas division look so unimportant by having people like Vickie come out and devalue the whole division in more ways than one.

Yes, she was just trying to get some more heat but even still, why do it at the expense of a Divas match between two good Divas?

Her announcement didn't even serve that much purpose either. She complained about a stipulation that didn't affect her or Ziggler in the end, and then got attacked by AJ. Was all that really worth interrupting a match for?

Daniel Bryan & Kane Take Anger Management Classes
This was always going to be pretty good, wasn't it? Daniel Bryan has been on a roll as of late, and after his anger management examination a few weeks ago I think there was no doubt he was going to be good in this segment as well.

His delivery was great as usual and his interactions with Harold and the little kid made for some pretty funny moments, but it was when Kane arrived that things really got entertaining. Having him bring up all of those incidents in the past really showed just how fucking nuts his career in the WWE has been. The way he said all those things in such a calm manner was also a great touch, and really made for a great segment.

Promo of the year, you say? I don't see why not.

Daniel Bryan vs. R-Truth
It'll be interesting to see where they actually go with this anger management thing. He's going in such an angry path that you have to wonder what will eventually make him happy. The only thing I can think of is a WWE title win, and I don't see that happening for a very long time.

Anyway, it was another fine performance from Daniel Bryan character wise. The way he played down the 'Yes' chants only to completely snap again was brilliant. It's great that he's getting so much attention every week.

Triple H's Not So Retirement Speech
Triple H haters really must have hated Raw last night. Between the many video packages and 'will he, won't he' talk from the commentators it must have been pretty hard to sit through.

Was it all a bit too much? I don't think so. As I said on Twitter last night, it served it's purpose. All the hype followed by the eventual promo by Triple H left many people convinced that he has indeed retired. So in that sense, it was a job well done.

Although many people want Triple H out, now is not the right time for him to do so. He still has a little bit to give in the squared circle, and when he does retire one day, he deserves a biger send off than what we saw last night.

In saying that though, I hope this retirement angle doesn't lead to a Lesnar/HHH rematch. Mostly because it would probably lead to Triple H winning, and as much as I love the guy, he just doesn't need the win. I hope for many things to come out of this storyline, but unfortunately that rematch seems to be what they're going for.

The whole build-up and promo was very well done, but I don't think it's worth it if it's just going to lead to a match that no one really wants to see.

Sheamus & Randy Orton vs. Alberto Del Rio & Dolph Ziggler
So, Ziggler gets some real credibility by beating Chris Jericho aaand it's gone. Now, I'm not one to constantly go on about wrestlers losing momentum by losing matches because let's face it, you can't go with a DQ finish all the time. But in saying that, why have Ziggler take the pin fall here? I know no one else in the ring should have been pinned but jeez, can't you try and build some momentum for the Money in the Bank holder?

Maybe I'm complaining about it too much. After all, it is just a loss to the World champion (which happened after getting hit from behind and receiving the Brogue Kick). In saying that though, it's a loss on top of another set of losses Ziggler has had since winning that Money in the Bank briefcase. Right now he just doesn't look like a threat to Sheamus' World title.

CM Punk vs. Jerry Lawler
It was a match that probably went a few minutes longer than it should have, but in the end, it came off well. I didn't mind Jerry Lawler getting in that much offence though. For a match like this to work, you need the underdog to get a glimmer of hope, only to get beaten quite easily in the end. In saying that though, CM Punk getting busted open came didn't help his dominant side (seriously, of all the times for someone to accidentally bleed).

Out of all that though, it was the post-match beatdown that came off more effective than anything else. I've been a firm supporter of the slow and eventual heel turn of CM Punk, and this further proves that I was right to do so. In the almost demented mind of Punk, this is almost beating some respect into the 62 year old man. Like I said at the start of the review, everything he says he seems to believe in, and that makes for his actions as well. Everything he did came across as if he thought what he was doing was totally justiciable.

Overall, I thought this was a pretty good episode of Raw. It dragged for a lot of the show (that's not exactly new though), but the positives out weighed the negatives in the end.